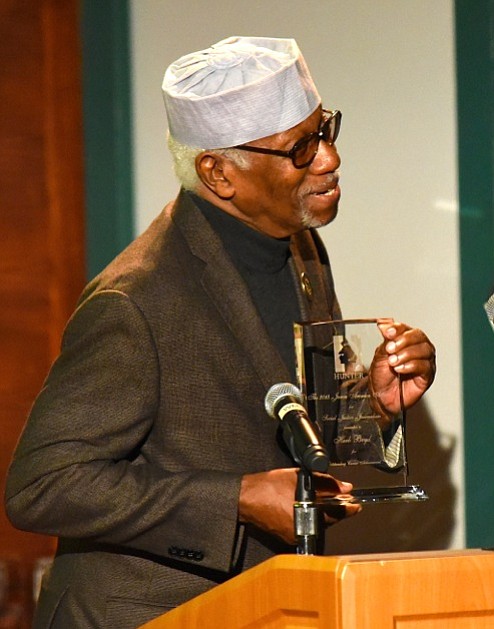 “His body of work explores the Black experience in American life—social movements, civic and political activism, police brutality, housing discrimination, reparations for the descendants of slaves,” noted the presenter as she introduced Boyd, “who is his own singularly rarified, pioneering hell-raiser in the world of journalism and in the world of books.”

She also mentioned how the Detroit-native has been a “tried and true, do or die Harlemite” for several decades and an “award-winning author of 23 books, including ‘We Shall Overcome: History of the Civil Rights Movement,’ ‘Black Panthers for Beginners’ and biographies on James Baldwin and Sugar Ray Robinson, among others.” His much heralded “Black Detroit: A People’s History of Self-Determination” covers much of the Motor City’s glorious African-American history.

Professor Boyd has conducted journalism classes at Wayne State University, the College of New Rochelle and the City College of New York, as well as at numerous lecture halls worldwide, for several decades—helping nurture the next generation of progressive writers.

Recalling his colleague Les Payne, who became an ancestor a couple of months ago, Boyd said, “Les was unique. He had a way of engaging you in conversation. He was a superb storyteller.” He reflected on some memories the two shared while documenting the African-American experience.

He then praised his soul-mate, Elza Boyd. “She has been such a faithful and loyal companion— one that has been absolutely talented as an editor. The 25 books I have written did not get out of the house without her keen eye.”

Boyd traced his journalistic journey back to the 1960s in Detroit before relocating to Harlem after being inspired by Malcolm X. Writing for several prestigious Black publications, he often covers topics the mainstream media will not touch.

He was later presented with a proclamation from Assemblywoman Inez Dickinson.