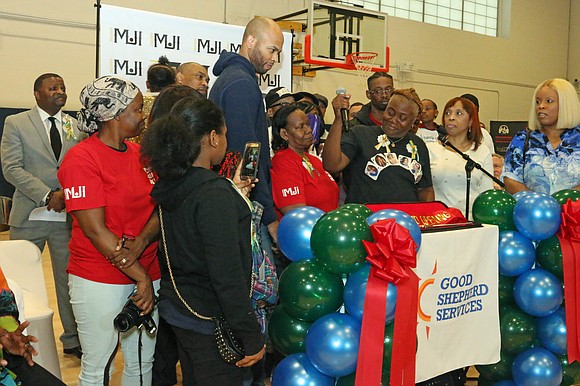 Just three working days after the opening of The Prince Joshua Avitto Community Center in East New York Brooklyn, the sentence was announced for the man convicted in the child’s 2014 death.

Last month, Daniel St. Hubert was convicted for second-degree murder in the death of 6-year-old Joshua “PJ” Avitto and attempted murder of his friend Mikayla Capers.

The jury in the case agreed that it was St. Hubert who stabbed the two children, killing one, inside an elevator in the Boulevard Houses public housing complex in 2014, and Monday he was sentenced to 50 years to life.

Just days before, on Thursday, May 17, a newly constructed center dedicated to PJ’s memory opened with a ribbon-cutting ceremony and much community fanfare and delight.

“The community is feeling elated with the opening of The Prince Joshua Avitto Community Center,” said Andre T. Mitchell, executive director of Man Up!, Inc.

The families and friends of PJ and Mikayla were joined by Assemblyman Charles Barron, Councilmembers Inez Barron and Jumaane Williams, Mayor Bill de Blasio and community activists such as Erica Ford. Mitchell said that with the $8.5 million state-of-the-art multipurpose community center at 876 Schenck, aka 876 Prince Joshua Avitto Way, “the community will have access to everything from legal services, to social services, media, arts and computer literacy services and sports.”