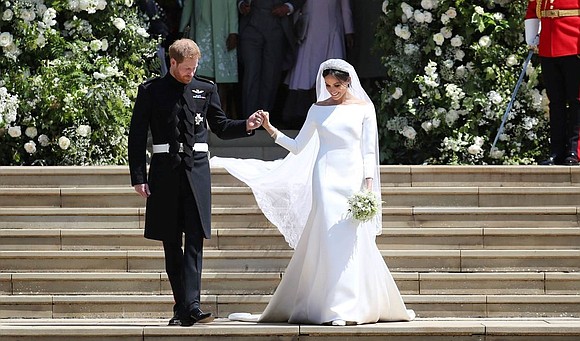 What a well-kept secret! Usually there is a leak from someone, somewhere. It wasn’t until Saturday, May 19, when Megan Markle gracefully emerged from the luxurious Rolls-Royce, that anyone outside of the royal family caught a glimpse of the wedding gown, created by designer Clare Waight Keller of the House of Givenchy in Paris. The designer couldn’t even share the news with her family. Sunday, May 20, Kensington Palace released the original sketch of Waight Keller’s original design.

For the wedding reception, the duchess stepped out in a white gown by English designer Stella McCartney. This gown was another stunner.

Waight Keller revealed, “The dress itself took approximately 3,900 hours to finish, while she worked with a group of 50 atelier members.” The royal commission included the wedding dress, veil, shoes and her bridesmaids’ dresses. As the artistic director of Givenchy, Waight Keller created her own materials for the wedding gown, made in a double-bonded silk cady that was pieced together by six seams. The look was opulent.

For several months, the bride worked closely with the designer on her minimalist wedding dress. “It was very collaborative,” said Waight Keller about her time with Markle. “We [had] conversations about what would be the ultimate lines and proportions and the scale of the dress, but over time, we quickly got to a point where I knew, she really knew exactly what she wanted.”

The House of Givenchy announced the appointment of British-born Waight Keller as artistic director in March 2017. As the first female artistic director of Givenchy, her responsibilities include their women’s and men’s ready-to-wear and accessories collections, as well as haute couture. “The teams joined me in warmly welcoming Clare Waight Keller into the Givenchy family,” said Philippe Fortunato, chief executive offer of Givenchy, when she arrived. “Clare brings her singular sense of elegance and modernity to Givenchy.”

“Hubert de Givenchy’s confident style has always been an inspiration, and I am very grateful for the opportunity to be a part of this legendary house’s history,” said Waight Keller.

Her wedding gown design was well-constructed and fit the bride perfectly.

Stella McCartney’s gown for the wedding reception was modern, young-looking and exquisitely shaped. McCartney is a very popular English designer and the daughter of famed Beatle member Paul McCartney. She also designed the gold yellow dress worn by Amal Clooney, actor George Clooney’s wife, and dresses for other guests.