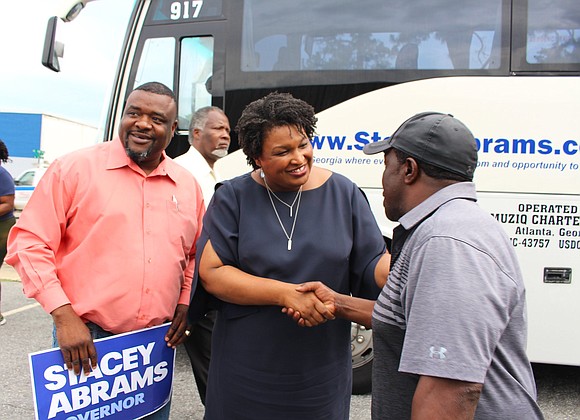 Abrams took more than 76 percent of the vote from her opponent Stacey Evans, also of the Georgia House of Representatives. Abrams’ Republican opponent will be determined July 24 during a runoff between current Georgia Lt. Gov. Casey Cagle and Georgia Secretary of State Brian Kemp.

If Abrams wins during the November general election, she would be the first ever African-American female governor of a U.S. state.

“Tonight, communities that are so often overlooked—whose values are never voiced—stood with us to say: ‘Ours is the Georgia of tomorrow,’” Abrams told voters Tuesday after her primary win. “A state where diversity is a strength. A state where progress is more than possible. A state where everyone has the freedom and opportunity to thrive. A state where equal opportunity is our truth, not their buzzwords.”

On the campaign trail, Abrams has been running on a progressive platform highlighting issues around youth and economic fairness. Several hot button issues she has been vocal about include lifting families out of poverty, more money for local businesses and more jobs in the green and energy sectors.

Abrams has also been highlighting her incarcerated brother, who suffers from mental illness, who is serving time because of “bad choices to support his drug habit.” She’s been using the incarceration to put a spotlight on her Justice for Georgia plan to implement criminal justice reform.

The daughter of two Methodist ministers, Abrams is a native of Gulfport, Miss., where she was raised before the family moved to Atlanta. She attended Avondale High School in DeKalb County, Ga., where she became the school’s first African-American valedictorian.

Abrams attended the historically Black all-female Spelman College where she earned her bachelor’s degree in Interdisciplinary Studies. She studied public policy at the University of Texas at Austin’s LBJ School of Public Affairs and went on to earn her J.D. degree from Yale Law School. She later worked as a tax attorney.

“Stacey Abrams is a leader who believes that Georgia’s potential is limitless if we work together to uplift every family,” said Harris. “From her efforts on criminal justice reform and voting rights to blocking Republican attempts to undermine the economic security of working families, Abrams has a proven track record of achieving progress.”

Former Democratic presidential candidate Hillary Clinton has also been a major supporter of Abrams, giving her endorsement last week. On the day of the primary election, Clinton recorded a robocall showing her support for the candidate.

“A Yale educated attorney, Abrams is the only candidate with bold new plans to ensure Georgians have access to good jobs, quality public schools, affordable child care and higher education,” she said.