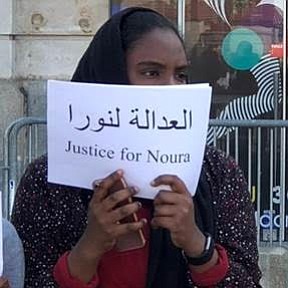 A Sudanese court has upheld a judgment of execution for a teenage girl who fought off the forcible sexual advances of her arranged-marriage husband, leading to his death.

Noura Hussein has been imprisoned in Omdurman, Sudan, since the murder of the man she was forced to marry, who she says raped her as his relatives held her down.

The case has highlighted the issues of forced marriage and marital rape in Sudan, where the legal age of marriage is 10 (as long as the girl is married by a guardian) and marital rape is legal. Approximately one in three girls in Sudan are married before their 18th birthday, according to the coalition Girls Not Brides.

Zaynub Afinnih, a 16-year-old activist living in France, responded to Noura’s story. “I don’t know her … I’ve never spoken to her,” Afinnih said in a press interview. “But she is my sister in humanity. I can’t let her die for defending herself against the man who raped her.”

Afinnih continued, “I couldn’t read the story and go back about my normal day. After that, I made the petition. I felt like I had to do something.”

Another activist, Sudanese-Australian blogger Yassmin Abdel-Magied, described the #JusticeForNoura campaign in a piece published in the U.K. Guardian. She explained, “I’m aiming it at all those folk who want to tell us this is the fault of our faith, when Muslim women are the ones fighting for their own rights, everywhere around the world.

“I don’t ask for people to sign petitions very often, but it would be great if you could give this one your support: https://www.change.org/p/zaynub-afinnih-justice-for-noura-marital rape.”

Since Hussein was sentenced May 10, calls for mercy have mounted.

U.N. Secretary-General Antonio Guterres demanded Sudan stop any attempt to execute Hussein and urged respect for her claim of self-defense against attempted rape.

Amnesty International has collected 174,000 letters from people around the world asking for her release—they’ve sent 150,000 of those letters to Sudan’s Ministry of Justice.

Calls for clemency have also come from U.N. Women, the U.N. Population Fund and the U.N. Office of the Special Adviser on Africa who wrote, “Speaking as the voices of women and girls of the world, we plead with the government of Sudan to save the life of Hussein.”