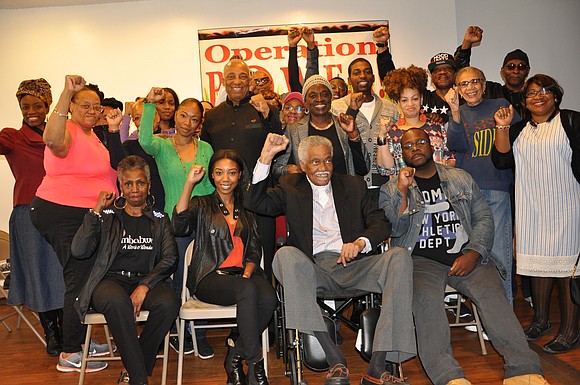 Monday, Nov. 5, 2018, marks the 49th anniversary of Black Solidarity Day. In 1969, Dr. Carlos Russell was inspired by a play written and produced by Douglas Turner Ward entitled “A Day of Absence,” which depicted a small southern town experiencing the ramifications of the unexpected absence of all the Black people. Dr. Russell initiated the call for a national Black Solidarity Day on the day before Election Day. A day of absence from school, work and shopping; a day for Black people to remove themselves from business as usual in resistance.

“This year, as we approach the 50th anniversary of Black Solidarity Day, we must recapture the heart of its principles,” explained Lateefah Carter, veteran activist in the December 12th Movement. “Dr. Carlos Russell envisioned a collective action that would impact the political and economic system that has and continues to oppress Black people today. Black Solidarity Day exposes the hypocrisy of U.S. democracy.”

She continued, “It has historically been held each year on the day before Election Day in order to heighten the duplicity of the U.S. political process and to exert the economic power of the masses in our people. No work, no school and no shopping allows us to fundamentally impact the political-economy. The absence of transit workers, nurses, teachers, social services, utility workers and government staffers, would cripple the city. Restaurants, retail stores, entertainment and sports would shut down.

“Black Solidarity Day is a day for us to come together and reflect on our current conditions and plan which way forward in resistance and liberation. As the right wing in this country becomes more and more virulent, hostile and violent toward people of color, we must stand in solid unity. The ethnic cleansing of Black communities across the country demands our direct action. We ain’t going nowhere. The relentless suppression of our votes demand a conscious analysis of the political-economic systemic itself. And we must pay close attention to the 2020 U.S. census.”

In conclusion, Carter declared, “We all must be counted and we Black!”

The Black Solidarity Day Coalition will hold three community events throughout the day with respect to the traditional call for “No Work, No School and No Shopping.”

The Our Streets! Rally and March Against Ethnic Cleansing will assemble at Bedford Stuyvesant Restoration Plaza at 2 p.m., on the corner of Marcy Avenue and Fulton Street, Brooklyn.