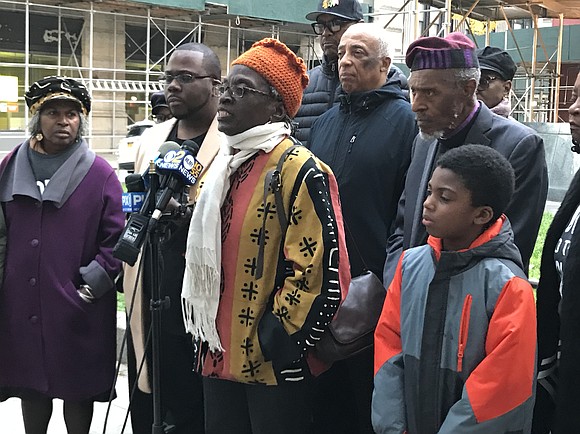 “We are angry! We are livid and we want an arrest!” shouted Assemblyman Charles Barron outside the African Burial Ground National Monument near City Hall that was vandalized last week with a racial slur suggesting that Black people be killed.

The hallowed ground is said to contain the remains of 15,000 enslaved and free Africans who lived and worked in colonial New York. In 1991, more than 400 skeletal remains were discovered during the construction of the Ted Weiss Federal Building. Community organizers and activists quickly acted to preserve the sacred ground as a New York City landmark. The African Burial Ground National Monument was finally proclaimed Feb. 27, 2006. It is one of the oldest and largest burial grounds in North America for both free and enslaved Africans.

The vandalism occurred sometime around 9:30 a.m. Nov. 1 and was reported approximately 12 hours later. Community activists are infuriated by the lack of urgency in apprehending a suspect by the local police precinct and federal authorities, who are said to be investigating the crime.

“We are angry because when other people’s synagogues or something gets desecrated, the media is out here for up to 10 days in a row, but when African people have some lowlife come and write ‘kill the N’s,’ you must be out of your mind if you think we’re going to remain silent,” said Barron.

Barron demanded the same respect anyone else’s ancestors would receive if their sacred grounds were vandalized.

“Gov. Cuomo and Mayor de Blasio your silence is deafening,” he said. “When you come out for other communities, come out for us, too.”

Even though several security cameras are located near the monument, no official footage of a suspect has been released. Activists are calling for the release of that footage immediately.

“We’re not going to allow this to be marginalized or trivialized, pushed to the side and forgotten about,” said Councilwoman Inez Barron. “Our people demand respect, and we are going to see that our ancestors get the respect and attention that they are entitled to.”

Activist Roger Wareham of the December 12th Movement expressed his outrage at the desecration of the site, coincidentally right before Black Solidarity Day, calling it, “reflective of an attitude that is suffusing this country with a real stench of white supremacy.”

The vandalism has since been wiped off, but it is still unclear by whom and when it was done.

The fight for justice continues for Barron and community activists, who will continue to demand answers from officials.

“To the people of African ancestry—this is the speech that Cuomo and de Blasio should’ve made together—we appreciate what your ancestors gave to build this city, and we’re going to use whatever resources we have to find this criminal,” said Barron.