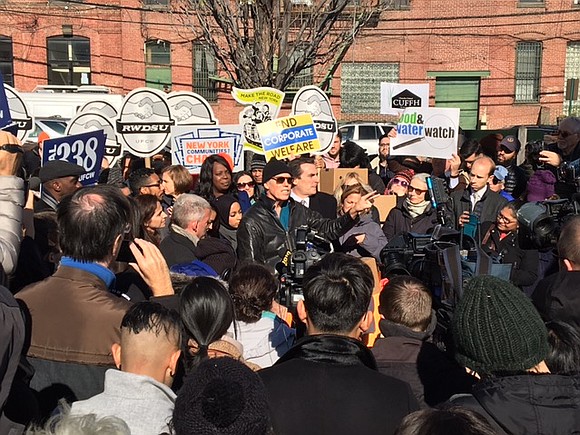 New York State Gov. Andrew Cuomo said that he would change his name to Amazon Cuomo to get the corporate giant to place their new headquarters here. Judging by the details of the deal, he might need to rename Long Island City after Amazon as well.

Cuomo and New York City Mayor Bill de Blasio announced Tuesday that New York City will be home to one of Amazon’s headquarters (Northern Virginia also won the bidding sweepstakes). Specifically, Amazon will take up space in Long Island City with 500,000 square feet at One Court Square while working on the construction of 4 million square feet of commercial space on Long Island City’s waterfront over the next decade.

According to Cuomo and de Blasio, the construction of Amazon’s headquarters will create 1,300 direct construction jobs annually through 2033. As for the other jobs, the mayor and governor state that Amazon will fill at least 25,000 new jobs by 2029 and up to 40,000 jobs by 2034. The average salary for those gigs will be more than $150,000. The state will allegedly benefit from more than $14 billion in tax revenue while the city will be the beneficiary of $13.5 billion in tax revenue.

Amazon will also get $1.5 billion in tax breaks and grants from New York and will begin hiring in 2019.

The aftermath of the announcement saw a gap in difference of opinion between some politicians and everyday New Yorkers. While politicians praised the potential jobs and economic benefits for the city, others pushed back against potential rising rents, gentrification, Amazon’s business practices, its connection with President Donald Trump’s anti-immigration efforts and the circumventing of the New York City Council to get this deal approved.

The firm Amazon used to lobby Albany is Whiteman Osterman & Hanna LLP. If that name sounds familiar to some it’s because it’s the same firm at the center of corruption scandals involving the governor. The firm employed Todd R. Howe who was the “bagman” for payments to Cuomo aide Joe Percoco. In September, Percoco was sentenced to six years in prison for accepting more than $300,000 in bribes.

“New Yorkers want, need and deserve good paying, quality jobs that help us meet the high costs of living in New York City with dignity,” said Blake. “The deal announced between Amazon, the city and the state is very troubling. The nondisclosure agreement that was signed between our government and Amazon was intended to keep us—both elected officials and community—in the dark, and, we are only now learning that New York City has agreed to abandon the receipt of property taxes and there will be a billion dollar’s worth of tax giveaways on top of that as well.”

According to Amazon, its contribution to the community includes a Payment in Lieu of Tax program based on Amazon’s property taxes on part of the waterfront development site. Amazon officials said the money paid via PILOT will fund infrastructure improvements developed through input from residents.