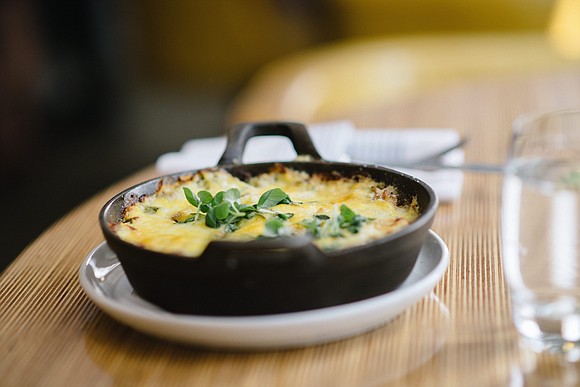 When I was growing up, every home had a black skillet. The blacker it was, the better for frying chicken. That chicken was cooked right to the bone. Some folks even ate the bones.

During World War II, there was a song entitled, “Save the Bones for Henry Jones, Cause Henry Don’t Eat No Meat.” There was a scarcity of meat at that time.

Whether we knew it or not, the element iron was leached out of that skillet and was absorbed into the foods. That might have been a blessing, as it prevented iron deficiency anemia.

Generally, iron is not a toxic metal unless you have a disease known as hemochromatosis. This medical condition prevents the excretion of iron, thus causing toxicity to build up in many organs of the body, including the heart or liver. I would say the “old” skillet is still safe to cook in.

In a musical that I wrote entitled, “Oh! Oh! Obesity,” there is a final scene in the church basement where the minister is conducting a “Watch Your Weight” program. A sister named Fatsie gets up to sing the finale, “I Fried and I Fried.” The lyrics state:

I fried and I fried,

I fried all night long.

I fried and I fried until the chops were gone.

I just couldn’t help from frying until the

One thing about that old black skillet, it was capable of cooking good chicken and keeping your iron stores up. On the market today, however, there are frying pans that might not be as healthy to cook in. For example, chefs love to use copper because it conducts heat quickly, ensuring well-cooked foods. Beware of toxicity found in copper. The copper skillet should be lined with a covering that will prevent the copper from leaching out into the food. Excess copper is toxic and can cause damage in the body.

A lot of folks use aluminum frying pans. These pans are safe as long as there are no signs of pitting and crusting. As you may be aware, aluminum might possibly be connected to Alzheimer’s disease. That is not conclusive. More folks are subjected to excess aluminum in foods, water, antacids and medications. Beware of that “old” aluminum skillet.

When traveling in a foreign country, you might bring home a beautiful ceramic cooking pot. Often, the paints used for decoration contain high levels of lead. Unless the pot has a statement saying it is lead-free, beware of lead toxicity.

A skillet containing a silicone surface seemingly is very safe to use and reduces the amount of oil used in cooking. You have heard it said that a person is like Teflon, which means nothing sticks to him. This expression is often used when a criminal gets away with a crime. Frying pans made from Teflon have that trail; nothing sticks to them.

Teflon is made from a chemical known as perfluro-octanoic acid. This chemical has not been tested thoroughly for toxicity, and DuPont, the manufacturer, is phasing it out. For safety, do not fry in these pans over very high heat, and replace them if they become chipped.

Finally, be careful using aluminum to prepare foods over your outdoor grill. You might be getting more aluminum than you bargained for. Be careful also of the fumes produced by the fat and hot coals that are absorbed in your tasty burgers. Lastly, as you fill your potbelly, be aware of the pots you use to cook those vittles in.