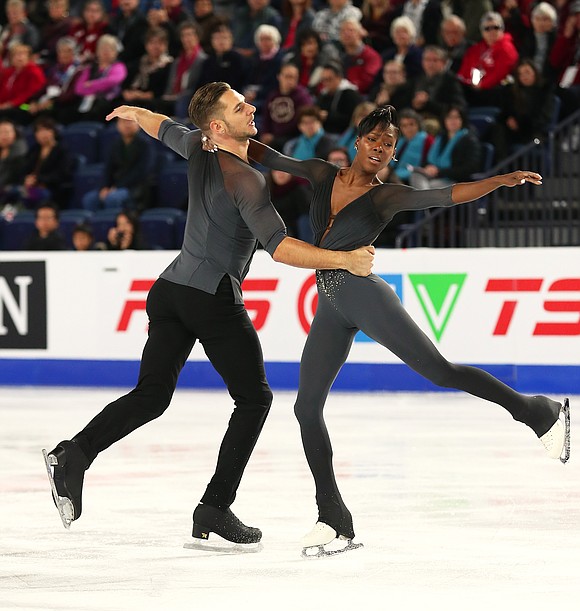 French pair skaters Vanessa James and Morgan Ciprès finished the 2017-18 season on a very positive note by winning their first medal at the World Figure Skating Championships. Immediately after, they set out on a three-week tour of France with fellow French skaters. When they finally got a break, both took time to consider their futures and came to the mutual decision to keep competing.

“We still had room to grow and hadn’t reached our max yet, so why not give it another try to see if we can improve on the last couple of years,” said James, 31. The duo returned to their training base in Tampa, Fla., where they are coached by John Zimmerman and Jeremy Barrett.

“We’ve worked a lot on transitions, on lifts, on new things that people never did before,” said Ciprès, 27. He found the music for the free skate, “Wicked Game” performed by Ursine Vulpine, to which he felt an immediate connection.

Since moving their training base to the U.S. in 2016, James and Ciprès have reinvented their skating and developed programs with great emotional impact. Their programs for the 2018-19 season were choreographed by Guillaume Cizeron (short program) and Charlie White (free skate), which has proved a winning formula. The pair opened the season with a win at the Autumn Classic followed by their first-ever Grand Prix gold medal at Skate Canada.

“This season, we’re trying to be innovative and stay true to ourselves,” said James. She and Ciprès had been thinking about new lifts and entries into the lifts, so when they began to work with their choreographers, they were able to offer ideas.

Cizeron, an Olympic teammate of James and Ciprès, and White are both ice dancers acutely attuned to the rules and dynamics of skating. They brought fresh energy, which elevated the performances. “We wanted something a little different to push us further,” said James.

While James and Ciprès have always been self-motivated, having former U.S. pair champions Haven Denney and Brandon Frazier as well as French lady’s competitor Maé-Bérénice Méité and men’s skater Kévin Aymoz join them in Florida has given an additional burst of energy.

“It’s a whole different world here with a high level pair team that gives us company on the ice—when it’s hard, cold and early,” said James. “It’s almost like home for Morgan to have French people here. We’re becoming a family.”

Next week, James and Ciprès head to Grenoble, France for the Internationaux de France Grand Prix event. They are aiming to collect more gold and qualify for the Grand Prix Final to be held in Vancouver, Canada in December.