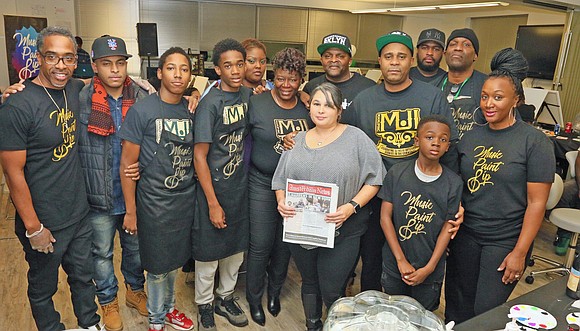 “Saturday was full of many different emotions as his anniversary always is,” said brave mom Kimberly Hairston, who traveled from Atlanta to East New York to commemorate the 15th anniversary of the shooting death of Daesean “Dae-Dae” Hill, her 8-year-old son, in Brooklyn. “This year I would say it was bittersweet. It was great to see family and friends who have been with me through this journey from the beginning. I felt so much love and support from the community.”

Community activist and Community Board 5 Chairman A.T. Mitchell and his Man Up! Inc. family hosted an event that marked the sad date, and also marked their 15th year of community organizing created out of the tragedy of the crossfire killing of Hill.

“I was very happy to see all of the work that Brother A.T. Mitchell and the Man Up family is doing in the community,” said Hairston. “I think it’s amazing. I believe sometimes something has to die to bring life to something else. Daesean’s death, brought life to a movement and a change in the community. For that I am very proud.”

This year Mitchell, Man Up! founder and executive director, commemorated the Nov. 17, 2003, anniversary and of Hill’s death. On that day, the 8-year-old grade-schooler was walking home from his East New York school with his stepfather, Stelly Chisholm, and his 5-year-old brother and 3-year-old sister, when he was fatally hit in crossfire between individuals caught up in a drug dispute. Suspected drug dealer Michael Walker, 23, was also killed.

Three people were convicted in Hill’s death, and sentenced to seven and one-half to 15-year terms.

Saturday, Nov. 17, 2018, balloons were released on the corner of Sutter Avenue and Hendrix Street, now also known as Daesean Hill Drive, as a symbol of remembrance of the young boy who inspired a movement that has changed and saved thousands of life over the past 15 years.

Indeed, there were plenty of tears and hugs for the heartache. There was reminiscing by family members and a tight community as they gathered to support each other. Afterward, Hairston and Mitchell, alongside Assemblyman Charles Barron and Councilwoman Inez Barron, led community members to the Prince Joshua Avitto Community Center for a wonderful, intergenerational music, paint and sip event, where signs for Dae-Dae, Man Up! and the Notorious BIG were created with stencils (courtesy of DJ Blue and legal aid attorney Anthony Posada of the Criminal Justice Unit).

“The event and the day turned out to be amazing,” Hairston said. “I felt Dae-Dae’s spirit in the room with all of the love. I would like to send a very big thank you to brother Mitchell, and my Man Up! family for bringing me back home and making this event possible, and most of all for consistently keeping Dae-Dae’s legacy alive. I’m very proud of the work he is doing.”

“I saw this young brother die, when they pronounced him dead at the hospital,” said Mitchell. “I was there with the family and with [now Assemblyman] Charles Barron. I never met Daesean personally, but I feel that I have known him all my life. For 15 years he has inspired our grassroots organization to want to do better, to be problem solvers. We created Man Up! Inc., to help our people.”

After the slaying of the youngster, Mitchell said he looked at what was going on with the youth, and Man Up! Inc., was born. Volunteers conducted community patrols to make sure children could walk home from school safely. Man Up! and its counterpart Woman Up! are nationally known for their violence interrupters and peacekeepers and wide variety of social, economic and cultural programs. In November 2003, Hill’s story was headline news for weeks, as activists and electeds such as the Barrons, the Rev. Herbert Daughtry and Mitchell, came out to show support for the young boy’s family. It was a tense and emotional time. Hundreds attended services held for Hill. The anger over the mindless violence permeated New York City.

Eventually, Hairston relocated to Georgia with her family.

“My surviving kids are survivors of gun violence,” she said. “They were in the middle of that.”

Her daughter Kaliyah is studying pre-law at HBCU Xavier College, but the family is struggling and taking out loans to pay for her schooling.

“We couldn’t even get scholarships,” she said. “Nobody put anything in place for my children. My son passed away, but it didn’t end with him. My oldest son Terrence—he was five at the time—he is now incarcerated, but he never got over losing his brother and seeing something as bad as that. It caused a lot of anger in him, and he never had the proper guidance.”

Hairston said that when the media lights fade, often times so do the people. “The only one I have spoken to is Brother Mitchell,” she said. “I want people to know if ever they are faced with this type of tragedy, just beware of people that’s around them.”

She said that as she was going through so much turmoil and painful emotions, all that she wanted was “for someone to take my hand and guide me the process.”

She added, “Because sometimes people try to capitalize off of a tragedy and it is really sad. And, I don’t want other parents to go through that, and feel hurt and used, because people say they are going to be there and make certain promises and never come with it.”

As she pushes forward, Hairston said that she never forgets what she lost.

“It’s a lifelong thing,” she said. “My son would have been 23 this year. I don’t know what he would have become, what kind of man he would have been. I don’t have the chance to hug him, or hear him say ‘Happy Mother’s Day’ because life was taken. It’s been such a long journey, and I’ve learnt so many things in the last 15 years. I’ve learnt forgiveness. I forgive the guys who killed him ... and that was the hardest thing that I have ever had to do. I even wrote one of them in jail and said that I know it wasn’t your intention to come out and kill my son, but you took something very precious from me. But I forgive you because I cannot hold on to that.”

As she continues to raise her “surviving children” and look to the future, Hairston said, “I really want more resources out there for the community, for people who are really going through this stuff. I am going to start my own scholarship fund for Dae Dae to keep his legacy alive, and just give back to the community.”

That would be particularly magnanimous considering her own financial difficulties. “I am struggling,” she said. “My car is breaking down every other day. I am staying with family members ... but if I can send $500 to help another family, I will do that. I am going to set up a website on my own, because things should be in place for survivors of gun violence. I can’t do anything for my son any more, but if I can help another family get through a tragedy, I am more than willing to help.