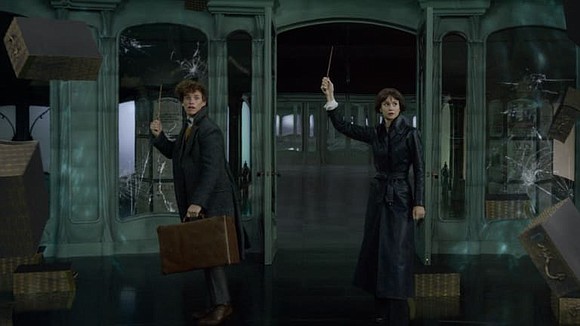 “Fantastic Beasts: The Crimes of Grindelwald”

Author J.K. Rowling was a single mother living on England’s version of public assistance, rejected by every major publishing company in the world and nearly at the end of her proverbial “rope” until a very intelligent editor at the Scholastic Corporation (Bloomsbury Publishing in the U.K.) understood the magic (pun intended) that the “little boy who lived” could bring to the world.

It was 1997 when Harry Potter and his world were introduced, and in no recent cinematic history has any filmmaker amassed the list of blockbusters and more planned prequels attached to the brand, all created by Rowlings.

Now playing is the newest installment, “Fantastic Beasts: The Crimes of Grindelwald.”

Set in the late 1920s, the film picks up with the adventures of the quirky magizoologist Newt Scamander (Eddie Redmayne) as he prepares to stop the dangerous, rising dark wizard Gellert Grindelwald (Johnny Depp, in perfect form), who he helped capture in the first film and who escapes from the American wizards shown in a prologue. A wizard who hates humans and a gifted speaker, Grindelwald hopes to spark a movement to enslave the world’s non-magical population and is desperate to enlist the powerful but deeply troubled Credence Barebone (Ezra Miller), who he tracks to Paris. Newt, although no fan of rules of any kind and who prefers a neutral stance, is finally persuaded to help the good guys find Credence first.

Newt’s world is filled with interesting people, magical and muggle (non-magic folks), including Jacob (Dan Fogler) and Queenie (Alison Sudol), who bring light-hearted romantic energy to the first part of the film. Meanwhile, on the evil front, Grindelwald sets up his headquarters in Paris and is helped by his loyal followers.

The battle of good versus evil is all in whom you can get on your side. So the race to secure that balance is at the heart of the film. A new character, Nagini (Claudia Kim), an Indonesian maledicta who is imprisoned in a traveling freak show, escapes and joins up with Credence. This act is her first step to eventually becoming Lord Voldemort’s slithering companion. Also searching for the pair are a bounty hunter (Ingvar Eggert Sigurosson) and a mysterious French-Senegalese magic man named Yusuf Kama (William Nadylam).

Despite being painfully shy, Newt has three romantic partners. His equally shy assistant Bunty (Victoria Yeates) quietly pines for him as she takes care of his magical beasts. Then enters Leta Lestrange, an old classmate (Zoë Kravitz in excellent form), who is engaged to Newt’s brother Theseus (Callum Turner). Finally, there is the obvious romantic tension with newly reinstated auror Tina Goldstein (Katherine Waterston, suffering a mild case of Petrificus Totalus). There is a bit of confusion when he flirts with a young Albus Dumbledore (Jude Law), who at the time was a Defense Against the Dark Arts professor.

The real business takes place in Paris, which has its own magical underworld full of outrageous street carnivals and unhelpful, greedy bureaucrats. It’s a lot to take in—this new world—but the film does have a plenty of plot twists and magical encounters to keep eyeballs fixed on the screen.

In “Fantastic Beasts: The Crimes of Grindelwald,” Rowling continues to explore issues of intolerance, racism and other ills that, like fast-moving cancer, can undo a world. Part of the genius of the Harry Potter series is its unapologetic stance against bullies and all of the “isms” that create havoc in the world.