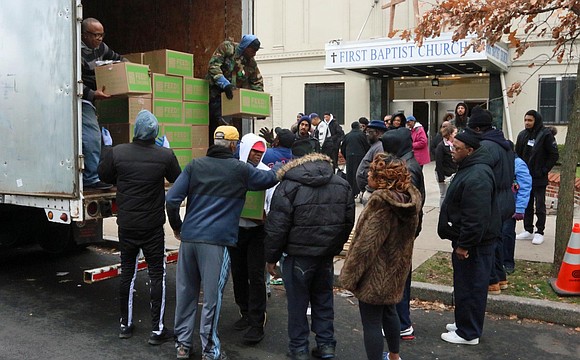 Volunteers unload some of the 2,500 meals at First Baptist Church in Brooklyn Lem Peterkin photo

Approximately 1.4 million New Yorkers don’t know where their next meal is coming from. As families prepare for the holiday season, new numbers indicate that many people in the area are struggling, even with a so-called improving economy that’s being celebrated by the White House.

According to two reports released this week by two of the city’s hunger advocacy groups, many food pantries are struggling to meet the demands and frequently have long lines. Many of those who are hungry are working. “We are in need of more funding to be able to meet the needs of all of our clients who come to our pantry,” said Alice Jackson, who serves as the pantry coordinator at New St. John Baptist Church in the Bronx. “We have had to close several times each month because we don’t have food for our clients.”

The report “Reflections of Hunger from the Front Lines,” released this week by the Food Bank for NYC, found that cuts to food stamps are a factor in the growing number of people using food pantries.

Food Bank surveyed 735 leaders from soup kitchens and food pantries from across the city between Oct. 6 and Oct. 29. Nearly 80 percent of food pantries and soup kitchens across the city have seen elevated traffic over the past five years since funding for the Supplemental Nutrition Assistance Program was cut. “This snapshot describes what we’re seeing right now on the front lines and comes directly from the men and women most intimately involved in ending hunger across the five boroughs,” said Food Bank For New York City President and CEO Margarette Purvis. “Our survey’s findings make it clear that in the 35th year of the city’s emergency food network, the perceived profile of reach and capacity of the neighborhood soup kitchens has completely changed.”

Wednesday, Food Bank gave a firsthand look at the problem in Harlem where more than 500 of the city’s most vulnerable residents were fed at a pre-Thanksgiving meal. To-go meals were also handed out for people to eat on Thanksgiving Day.

“Ironically, unemployment is at an all-time low, but the reality is that the jobs are mostly part-time and although more people are employed, the desperation is higher because this same population that is working no longer qualifies for SNAP benefits,” said Teresa Conception, executive program director of U.M. Church of the Village.

The formerly Republican-ran U.S. Congress approved cuts to food stamps passing earlier this year. The GOP politicians believed the food benefits discourage people from working; however, people are not only left jobless but also hungry.

“This is a perfect time to pull people out of poverty, into the workforce, onto the ladder of opportunity,” former House Speaker Paul Ryan said in June.

As the number of people in need of food goes up, so does the price. The average cost of a meal is up 27 percent across all boroughs and 46 percent in Manhattan alone. Nearly one in five, or 19 percent, of New York City residents rely on SNAP.