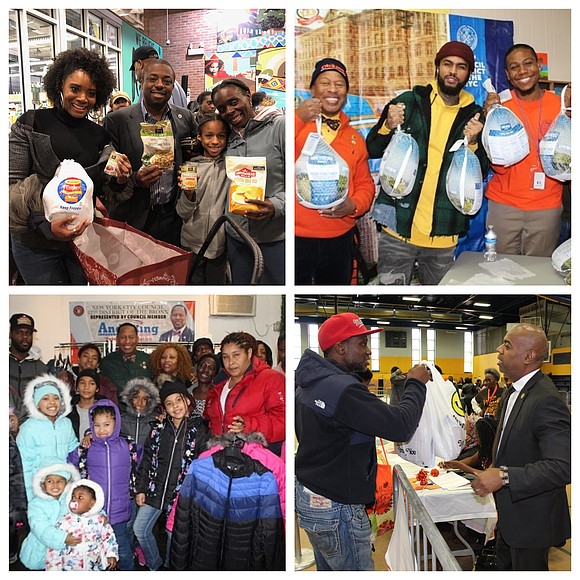 Thanksgiving around the city Contributed

The spirit of Thanksgiving was felt across the city as people came together to celebrate the holiday with food and camaraderie. Throughout the week there was also a sense of giving back as many people across the city are volunteering their time to help others.

Thousands of people lined up from the Upper West Side to Midtown to watch the 92nd Macy's Thanksgiving Day Parade. Floats, marching bands, celebrities and Santa Clause made their way through Manhattan. Giant balloons this year included The Elf on the Shelf, Fantasy Chocolate Factory by Kinder, Rise of the Teenage Mutant Ninja Turtles by Nickelodeon and Splashin Safari Adventure by Kalahari Resorts and Conventions. Diana Ross, John Legend and Anika Noni Rose were among this year’s performers.

The National Action Network (NAN) hosted a free Thanksgiving dinner for the community at the House of Justice in Harlem. The event was free and open to the public. Earlier this week NAN distributed free turkeys to families.

Elected officials and other prominent New Yorkers will joined Joel Berg, CEO of Hunger Free America, to release the organization’s annual survey on demand at soup kitchens and food pantries and new findings on food insecurity and hunger in New York City and New York State. The report is the only one of its kind identifying how many people in New York City and State are working and still living in hunger. Berg also released first-ever data on hunger numbers in the New York City Metropolitan area in addition to first-ever data on the cost of ending hunger.

Monami Entertainment CEO Mona Scott-Young continued her philanthropic community work this holiday season as a team leader in the GrassROOTS Community Foundation’s (GCF) annual #GiveThanks Turkey Giveaway program. A GCF board member since 2013, Scott-Young helped provide healthy meals for almost 1000 families and elders in need this Thanksgiving along with tv personality/entrepreneur Yandy Smith-Harris. The turkey drive has expanded beyond Newark, NJ to include Atlanta and Harlem. A cocktail fundraiser was held last Saturday at the Montclair Art Museum.

New York City Council Member Andy King, Rapper Dave East and representatives from community and faith-based organizations distributed turkeys to the public for the holiday season. The Thanksgiving giveaway took place at Beulah Church of God, Bronx. Scores of people stood on line to receive hoodies and backpacks donated by East and turkeys donated by the Governor’s office, MetroPlus, Workmen’s Circle and Fresh Direct. Members of the Bronx Youth Empowerment Program assisted in the distribution

Earlier this month, King and Bronx restaurant owner Paul Brown kicked off the season of “Sharing is Caring” by providing a hot lunch and distributing brand-new winter coats to more than 50 children from the neighborhood. Many of the coat recipients resided at Eastchester Garden’s NYCHA development, which is experiencing major heat insufficiencies.

On Wednesday, Food Bank For New York City served a pre-Thanksgiving meal with all the fixings to more than 500 of the city’s most vulnerable residents, including an early seating just for seniors. Food Bank will also provide hundreds of “Thanksgiving Meals to Go,” so that residents will have a special meal on Thanksgiving Day.