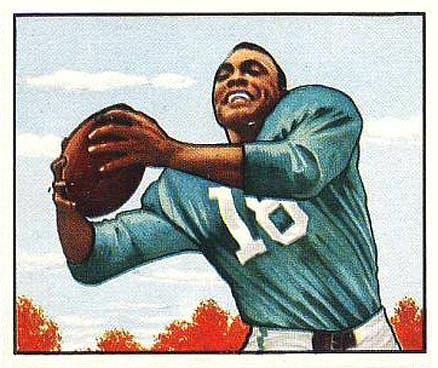 Coming of age in Detroit, it was easy to idolize the legendary boxers Sugar Ray Robinson and Joe Louis because they had roots in the city. On the baseball diamond, there were the Detroit Stars of Negro Leagues to cheer in the hot summer months. It was not until 1958, when Earl Lloyd put on uniform did the NBA Pistons have a Black player. So there was widespread joy in the community when Wally Triplett broke the color barrier with the Detroit Lions in 1949.

Triplett was his name—and his feats on the gridiron were refreshed Thursday, Nov. 8, when he died in Detroit at 92—but besides his breakthrough with the Lions, he was the first African-American to play in a regular NFL game and the first Black to start at Penn State.

Born Wallace Triplett April 18, 1926, in La Mott, Pa. near Philadelphia. He was the fifth of six sons born to Mahlon and Estelle Triplett. He excelled in football, basketball and baseball at the Cheltenham High School.

After making his debut as the first African-American starter for the Penn State football team in 1945, his first appearance on the field was against Michigan State with the prospect of running the ball against the University of Miami, a segregated school where Blacks were not allowed to compete against white players. To adhere to the Jim Crow policy, the team voted to cancel the game, thereby setting a new precedent.

When the team had another successful season, it was invited to the Cotton Bowl in 1948, and once more Triplett and the other African-American team member, Dennie Hoggard, encountered segregation in an annual classic where no Blacks had performed before. But unlike the previous year in Miami, after the team was asked if it was possible to leave Triplett and Hoggard at home, their teammates were unanimous in their disapproval of such a plan, saying, “We are Penn State, there will be no meetings,” referring to the previous cancellation in Miami. Oddly enough, when Triplett was in high school, he had been offered a scholarship to attend the University of Miami, until his race was revealed.

Along with his exploits on the football field, Triplett participated in several college groups and student activities, including the co-founding of the Gamma Nu chapter of Alpha Phi Alpha at Penn State.

The Nittany Lions faced the Southern Methodist University Mustangs, featuring the outstanding running back Doak Walker. Walker, a versatile player, threw the first touchdown pass, and then scored himself later, but the extra point was missed, giving them 13 points. In the third quarter the Lions roared back with Triplett catching a touchdown pass, but they, too, missed an extra point, and the game ended in a tie. Ironically, Walker, who won the Heisman Trophy that year, later joined the Lions, where Triplett had arrived a year earlier. As teammates for the Lions in 1950, for example to compare their performances, Walker was the star, whether running or receiving the ball. Triplett was mainly on what is called the special squads today, receiving punts and kickoffs.

A shifty speedster, Triplett was drafted in the 19th round, and in his rookie year set a team record for the longest run from scrimmage with an 80-yard touchdown against the Green Bay Packers. Oct. 29, 1950, against the Los Angeles Rams, he had compiled 294 yards on four kickoff returns, including a 97-yard touchdown. That total stood as an NFL record until 1994.

Triplett only played in 18 games for the Lions before being serving in the Army during the Korean War. After leaving the Army, he returned to the NFL for one season with the Chicago Cardinals. In 1953, he hung up his cleats and worked as a teacher, in the insurance business and in management for the Chrysler Corporation.

During an interview two years ago, Triplett, who insisted on being called a Negro, recounted his days in the NFL. “When I look at this thing they call the NFL draft now,” he said, “I laugh at it with tears because to be drafted now means you’re automatically in a group with people that are going to get paid for doing nothing.” His contract was $4,800 for his first year with the Lions. Nowadays, $2 million is the average pay per player.

Despite his resentment of the current outrage by Black players, Triplett’s place in the pantheon of the sport is secure, if former Lions coach Jim Caldwell has a say so. “The things he went through there, if you’ve read a little about the background of his situation, it was pretty unique because I think they went to a bowl game and they had an issue about whether or not he could eat a certain restaurant or stay at a hotel,” said Caldwell. He added that Triplett was a trailblazer, and that trail was left with the same speed and finesse he displayed in uniform.