The Alliance of American Football can salvage NFL careers 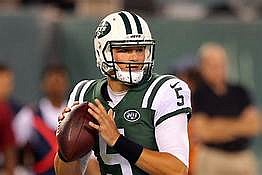 The Alliance of American Football, a new professional football league that will debut Feb. 9, airing on the CBS Sports Network less than a week after Super Bowl LIII, will not be a competitor of the NFL. That wasn’t the intent when Charlie Ebersol and Bill Polian co-founded the AAF.

Ebersol, the son of legendary television executive Dick Ebersol, and Polian, a Bronx native who attended Mount Saint Michael Academy and NYU before helping to build the Buffalo Bills into a franchise that made it to four straight Super Bowls as their general manager as well as constructing the Peyton Manning-led Indianapolis Colts into the Super Bowl XLI champions as vice chairman, have firsthand experiencing in the failures of several leagues, including the USFL and XFL, in trying to take on the behemoth that is the NFL.

What the AAF will be is a viable pathway into the NFL for players that need to further develop their craft, such as former New York Jets quarterback Christian Hackenberg. The 23-year-old was once projected as a future elite NFL QB while playing for Penn State. The Jets, believing he possessed the necessities to someday be their starting quarterback, drafted the 6-foot-4, 228- pound Hackenberg in the second round—the 51st overall pick—in 2016.

After showing no signs he would be a consistent NFL starter or reliable backup, the Jets traded him to the Oakland Raiders last May. He was summarily released by the Raiders, and then failed to earn a roster spot with the Philadelphia Eagles and the Cincinnati Bengals. Tuesday, the Memphis Express, one of the eight inaugural teams in the AAF, made Hackenburg the league’s 15th pick.

At the outset, the AAF’s star power will be generated by its coaches, which is a who’s who of football, including Michael Vick, the offensive coordinator of the Atlanta Legends; Hall of Fame linebacker Mike Singletary, who will lead Hackenberg and the Memphis Express as their head coach; and Mike Martz, head coach of the San Diego Fleet and visionary behind the aptly named Greatest Show on Turf, the St. Louis Rams of the late ’90s and early 2000s.

Martz was the Rams’ offensive coordinator when they won Super Bowl XXXIV in 2000 and took them back there in 2002 as the head coach, losing to the New England Patriots 20-17 on a field goal by the Patriots’ Adam Vinatieri as time expired. Martz’s quarterback was Kurt Warner, who went undrafted out of Northern Iowa in 1994 and emerged from the Arena League with the Iowa Barnstormers to become a two-time NFL MVP and 2017 Pro Football Hall of Fame inductee.

It’s not inconceivable that Hackenberg or someone else will resurrect a career in the AAF and become a productive NFL player.