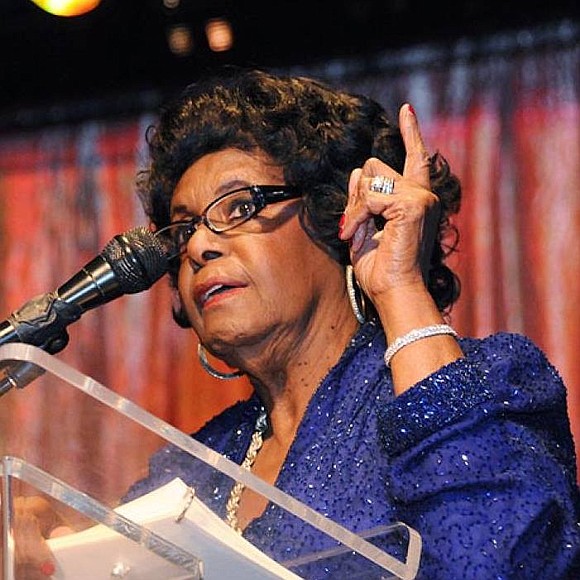 The 46th annual AUDELCO Awards held Monday, Nov. 19, at the Tribeca Performing Arts Center was an event to remember! The year’s theme was “Amazing Grace” in honor of the late president of AUDELCO (Audience Development Committee), Grace L. Jones, who died in August at the age of 90.

The AUDELCO Awards recognize and reward excellence in Black theater. This year’s awards had remarkable moments, including four ties occurring in some very prominent categories. There was a tie in the Best Play category as the AUDELCO was awarded to “A Small Oak Tree Runs Red” from the Billie Holiday Theatre in Brooklyn and “The House That Will Not Stand” from the New York Theatre Workshop. The Best Revival of a Play category recognized both “A Soldier’s Play” from the Negro Ensemble Company and “The Old Settler,” again another honor for the Billie Holiday Theatre. There was also a tie in the Outstanding Ensemble Performance category. That spotlight went to “Paradise Blue,” with J. Alphonse Nicholson, Kristolyn Lloyd, Keith Randolph Smith, Francois Bastiste and Simone Missick from Signature Theatre Company and to “Sugar in Our Wounds,” with Stephanie Berry, Sheldon Best, Fern Cozine, Tiffany Rachelle Stewart and Chinaza Uche from Manhattan Theatre Club. The final tie of the evening was in the category of Outstanding Musical Director, which went to Shelton Becton for his stupendous work with “Carmen Jones” and to Richard Cummings Jr. for “On Kentucky Avenue.”

“Carmen Jones” ended the evening with a total of five AUDELCOs— in addition to Becton’s, it also earned Best Revival of a Musical for Classic Stage Company; Choreography for Bill T. Jones; Lead Actress in a Musical for the fabulous Anika Noni Rose; and Lighting Design for Adam Honore.

Three productions walked away with three AUDELCOs. “Paradise Blue” won two other prestigious awards including Playwright for Dominique Morriseau and Director of a Play for the one and only Ruben Santiago-Hudson. The Negro Ensemble Company’s, “A Soldier’s Play” also came away with Featured Actor in a Play for Gil Tucker and Costume Design for Ali Turns. “The House That Will Not Stand” also won Lead Actress in a Play for Harriet D. Foy and Featured Actress in a play for Joniece Abbott-Pratt.

Lead Actor in a Play was awarded to David Roberts for “Josh: The Black Babe Ruth.” Solo Performance was won by Sharon Washington for “Feeding the Dragon.” Sound Design went to Luqman Brown for “The Peculiar Patriot.” Set Design went to Chris Cumberbatch for “Harriet’s Return.”

So often winners acknowledged Grace L. Jones and her encouragement in their lives. This year the Grace Jones Lifetime Achievement Award was initiated and was awarded to theater and acting veteran Arthur French and actress, singer Melba Moore. Special Pioneer Awards were presented to publicist extraordinaire and producer Irene Gandy and to Cheryl Wills. Outstanding Achievement Awards were given to dancer/choreographer/director Savion Glover and to Timothy D. Stickney. Board of Directors Awards were presented posthumously to the late Tad Schnugg and Gertrude Jeannette. The Rising Star Award was given to Chinua Baraka Payne.

This year’s honorary chairs were Pauletta Pearson Washington and Roscoe Orman and Kimberly Orman. The AUDELCO’s are always a Black family reunion, and the energy is always off the charts. To become a member of AUDELCO, go to the website www.audelco.org or call 212-368-6906. Being a member of AUDELCO and having a chance to vote for your favorite shows is your way of keeping Black theater alive. We must keep AUDELCO alive so that it can continue to praise, support and honor Black theater. Our theater! Our stories told by us!