Brooklyn will have to put that Butler shot behind them 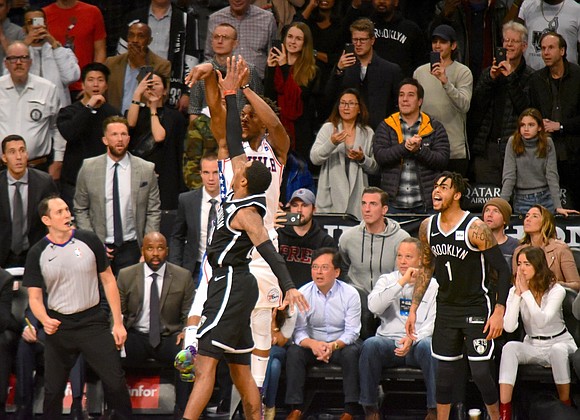 Earlier this month, the Brooklyn Nets defeated the Philadelphia 76ers decisively. They continued to do so Sunday, again at home, the Barclays Center, for two more quarters, leading 68-54 at the half. But this time, Philly made adjustments at halftime, and on the 10th of this month, acquiring Jimmy Butler in a trade with the Minnesota Timberwolves.

Butler took the winning shot with 2.3 seconds left, a two-step, one back-one right three with Rondae Hollis-Jefferson in his face, by Brooklyn’s bench, leaving 0.4 seconds on the game clock.

Philly, down by 20 at times, matched Brooklyn in third quarter points, outscoring them 35-34, blowing them out 38-23 in the fourth.

“I thought our guys competed,” said head coach Kenny Atkinson. “They led for most of the game. It’s one of those you think you deserve to win it, and they pull it out at the end. But listen, credit to them. They hit some tough shots.”

D’Angelo Russell hit for 38, with 8 assists and 8 rebounds. Jarrett Allen had a double-double, 17 points and 10 rebounds, supplemented by Spencer Dinwiddie’s 31 points and 5 assists off the bench.

“It’s tough,” said Russell. “We played 45 minutes of that game and lost it to that one shot.”

“They do have a lot of confidence in me, but I got so much more confidence in those guys,” Butler emphasized. “They really got us back in the game,” although his tone was different about the game winning shot.“I was taking that shot. The ball was going up.” There was no alternative for him.

“He kept taking his time, and I am like, ‘Are you going to freaking shoot the ball?’” said teammate Embiid. “Big-time play. He got to his spot and he made a big-time shot.”

Brooklyn will have to put the shot behind them and focus on home games with the Utah Jazz (last night) and the Memphis Grizzlies (Friday) and a road game Saturday against the Washington Wizards, a back-to-back before hosting the Cleveland Cavaliers, the Oklahoma Thunder and the Toronto Raptors, Monday, Wednesday and Friday, respectively.