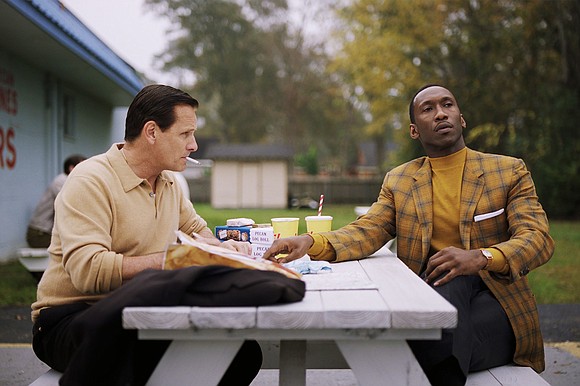 The subject that is explored in the new film “Green Book” (which is the Green Book) is registering as a surprise to a lot of non-Black theatergoers, but for our community, it’s something that was (usually) shared by the older generation in an effort to keep the listeners safe.

Meant for Black people planning a vacation or a trip, this travel guide listed friendly places to stay and tips for avoiding trouble in the Jim Crow South.

The film “Green Book” lives up to the title as it is a road movie and utterly unique. It’s based on the true story of an unlikely friendship between a brilliant Black concert pianist and the New York City bouncer hired to chauffeur him through unfriendly territory.

In many ways, the intolerance in 1962 America is frighteningly similar to what’s happening in Trump’s America. In ’62, segregation and other openly racist policies as well as open lynchings made any trip a dangerous proposition but even more so for composer-musician Don Shirley, a wealthy, well-educated Black man (Mahershala Ali) with or without bodyguard/driver Tony (Viggo Mortensen) to watch his back.

The performances and the chemistry between Mortensen and Ali is electrifying. Directed by Peter Farrelly, known for his comedy and feel-good movies, this story delivers the emotional impact along with the laughs.

The subject itself—racism and intolerance—is heavy and it might take a feel-good movie such as this onesto help people, on all sides, take a look at what all the fuss is about. Racism is stupid, unproductive and it only benefits the 1 percent. The chemistry between the two leads, both of whom are showing audiences a different side of themselves, might make this film a possible Oscar contender.

Dr. Don Shirley is a regal Black man. Tony is not, and his distinctive Bronx accent and his love of food bring the humor in heaps. You can be assured that Tony says a lot of things that are not politically correct but you can’t dislike this character for long.

Out of a job after a local club closes, Tony finds a gig, fast, accepting the role as a driver for Dr. Shirley’s eight-week concert tour, which will mean leaving his wife (Linda Cardellini) home with the kids while Shirley’s two fellow musicians, bassist Mike Hatton and Russian cellist Dimiter D. Marinov, take their own car.

One of the interesting themes of the movie is how despite their cultural backgrounds the two men saw in each other a lot of qualities that earned their mutual respect.

The good times can’t last long given their route, so what happens (thankfully) is that the audience’s eyes are opened as “Green Book” shows just how inhuman and ugly Americans could be to their neighbors in 1962. It’s more than just the sheer indignity of not being allowed to eat, sleep or use the bathroom in the same establishments as white people. To highlight the cruelty that is the legacy of this country, Shirley goes to a bar alone and receives a beating for the simple fact of being Black. Tony shows up just in time to rescue Shirley from the rednecks’ clutches. Here, he sees firsthand the type of abuse that lies ahead—not only from the ignorant population but also from the police (naturally, they’re pulled over more than once) and, most insultingly, from the high-society whites who’ve actually engaged Shirley’s services.

It’s OK. Shirley has the last laugh. He’s a brilliant musician and has a God-given talent that no human can take away. Ali is a marvel to watch in his musical performances.

“Green Book” does a superlative job showing the hate and disrespect that people of color were shown not only in the South but also in New York City, where Shirley keeps an elegantly decorated apartment above Carnegie Hall.

The eye candy is delicious with a special nod to costume designer Betsy Heimann. From the first time we see Ali in his period-specific clothing we know the place, and time, and the fact that Shirley is proud of his heritage.