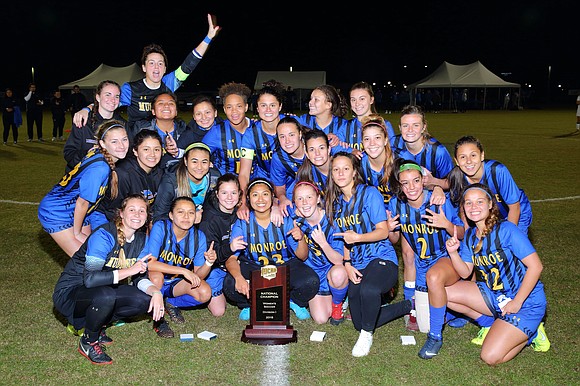 It has been a triumphant season for the Monroe College women’s soccer team. They’ve trained hard, maintained their composure and kept on winning. On Nov. 17, the Mustangs became the 2018 NJCAA Division I Women’s Soccer National Champion, defeating defending champion Tyler Junior College 3-1 at the Foley Sports Complex.

“It was a tough first half for us, and the girls really changed the whole momentum of the game in the second half and toward the end of the second half clearly took control of the game,” said coach Marcus DiBernardo. “They showed great character all season, so it was really nice to see. Internally, the girls were driven. They love to compete; they hate to lose.”

An integral part of the team’s success during the season and in the national tournament was the commitment and dedication of the players who come off the bench. The improvement of those players who don’t get as much playing time was huge.

“That was an underlying reason of why the team was able to sub girls into the game, and they had a big part in helping win the national championship,” said DiBernardo.

DiBernardo is in his 11th season with the men’s soccer team at Monroe and took the helm of the women’s program this season. He credits assistant coaches Jonathan Avila and Kevin Piccardo and goalkeepers coach Bouna Coundoul with making a huge impact on the program.

Monroe’s men’s soccer team competed in the men’s national tournament, which was held in Daytona, Fla. After the team lost in the semi-finals, DiBernardo and players took an eight-hour bus ride to be present at the women’s championship game in Foley, Ala.

“We want our teams to support every athletic team at Monroe, but especially the sister and brother teams,” said DiBernardo. “There is a lot of mutual respect. It is a nice soccer community at Monroe. The guys were super psyched to be there. They cheered the whole final.”

Needless to say, many of the players on the women’s teams are hearing from coaches at four-year institutions. DiBernardo will offer advice, but ultimately it’s up to the players to decide where they want to go. The same is true for the men’s team.

The freshmen get a break until January, when indoor training commences. By March, they will begin playing outdoors and having weekly games. DiBernardo tries to line up some high-level opponents that will challenge them and elevate their games. Most of the players play summer ball until training starts up again in August.