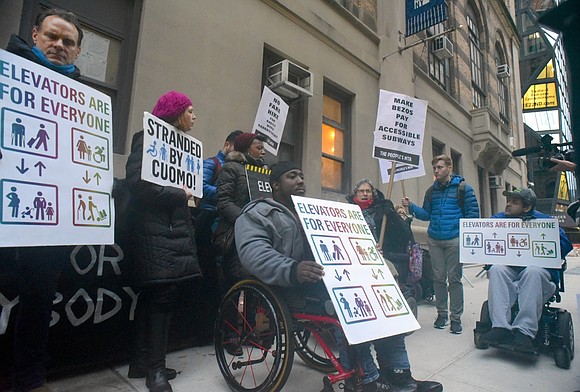 Protesters outside of the MTA public hearing Bill Moore photo

Outside of the venue, a New York City police officer could be heard telling those in line, “The signs are allowed in. The sticks are not.” Some of the signs held outside of the venue included “Make Bezos Pay for Accessible Subways,” referencing the recent deal involving Amazon’s new headquarters in Long Island City, “Stranded by Cuomo” and “Elevators Are for Everyone.” The latter message came during a news conference outside of Baruch College called by Rise & Resist and The People’s MTA.

Mary Kaessinger, of The People’s MTA, laid out her reasons for protest.

“We fight for accessibility to the subway for elevators so that disabled people can use the trains basically,” Kaessinger explained while sitting in her wheelchair in line to go into Baruch College. “We believe subways should be funded, but we should find another source besides the riders because it’s getting impossible to be able to afford it.”

No matter the choice, LIRR and Metro North fares would go up by 4 percent under both proposed plans, and MTA officials have also suggested increasing bridge tolls by 8 percent to fund capital projects. They’ve also proposed reducing E-Z Pass discounts.

This doesn’t sit well with another person standing in line who chose to go by the name Mr. Peters.

“There’s still repairs to be done. There should be no fare hike,” said Peters. “The real issue is that we need money from the federal government, but with Trump in there, we don’t know what he’s going to do. Raising money for tolls? No. Why raise the fare when people who are unemployed like me can’t afford the fare?”

“Right now, about $100 a month comes out of taxes per person to pay for the subway in addition to the MetroCard,” said Kaessinger. “So we’re already paying more than $3 for a ride.”

Kaessinger said that the city and state should look to their new residents for help.

“Here comes [Amazon CEO Jeff] Bezos who makes $191,000 a second,” Kaessinger said. “He’s the richest man in the world. Bringing him here and giving him that tax break was ridiculous. He should be the kind of person you tap to help fund the subway. He wants his workers to get to work on time—it’s in his interest to want to have a good subway.”

This month, the MTA’s financial plan revealed that the agency still expects a more than $1 billion deficit by 2021 regardless of any potential fare hikes. Officials have pointed to revenue decreases stemming from competition with ride-sharing apps and fare evasions, but provided no evidence for each.