One Lady and two men in a room: Andrea Stewart-Cousins 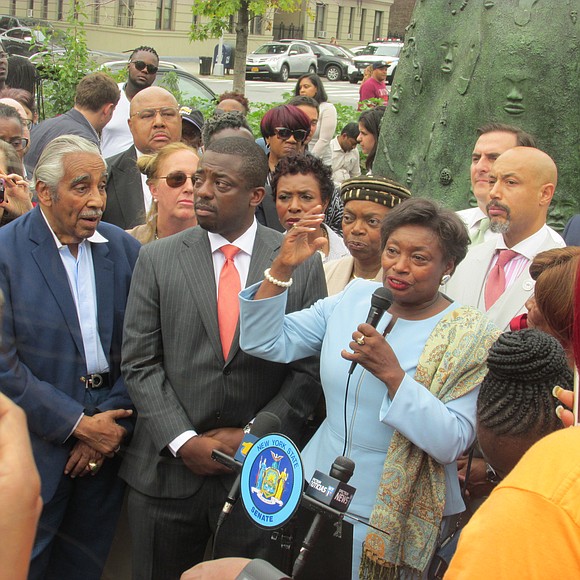 State Sen. Andrea Stewart-Cousins makes her way into the history books this week after being elected the majority leader of the New York State Senate. She is the first woman to lead a major conference in the State Legislature.

Democrats took control of the State Senate during this month’s general election. Stewart-Cousins’ election by her colleagues is another example of the shift in the political landscape at the state and national level, where more women of color are not only elected but also taking on leading roles.

“We’re excited because we know in January people will finally get the government they have been voting for for so many years,” Stewart-Cousins said at a news conference this week. “We are looking forward to not only serving the people of New York, but doing it with the type of attention and integrity and intelligence they expect from us and deserve.”

Stewart-Cousins takes her place as one of the state’s “three men in a room,” a term used to describe the legislative powerhouse unit consisting of the governor, Assembly speaker and Senate majority leader who make major decisions.

In a recent interview with the AmNews, Stewart-Cousins to discussed what she plans to do in her new position.

“I feel honored and humbled by the opportunity that my colleagues have afforded me,” she said. “It is something that I don’t take lightly. I know it’s a great responsibility, but I’ve always known that about public service. It’s an opportunity to make things better for the people that deserve it.”

She added that her election as majority leader is also a sign the voters are starting to realize that they are their government and can have their voices heard by exercising their right to vote. She said after the 2016 election there was a “reawakening” for people to become more involved in the political process.

“The voices of women are as important as the voices of their male counterparts, and the more of the diversity of voices that come to the table, the better the policy outcomes,” Stewart-Cousins said.

In January, the State Senate will have the largest Democratic majority in the history of any conference. Many of the new senators are young, first-time politicians who beat longtime incumbents. In total, there are 15 new members coming to Albany. Stewart-Cousins sees it as another opportunity.

“We’re going to have people who are coming in with new ideas and an energy and a love of public service,” she said. “So much of the same thing people run on we have talked about in the conference.”

New York State has been a prime target when it comes to immigration, with rhetoric coming from President Donald Trump critical of the state’s sanctuary stance. Stewart-Cousins said millions of dollars have been set aside for legal representation for immigrants.

“We understand the importance of opportunities and people not being demonized because they are not ‘us,’” she said. “We are in great position now to look at our legal option when it relates to the politics that come from the federal government.”

Stewart-Cousins said that her vision for New York State is to uphold the state’s legacy of civil rights, labor rights and women’s rights. She wants the state to continue to be at the forefront in the fight for justice, opportunity and removing barriers for people to achieve their goals and dreams.

“I’m happy that I’ll be working with Attorney General Letitia James, along with the governor and Speaker Heastie to make sure that New York is a place where we are expressing our values as an inclusive state,” she said. “I have a vision of a New York that’s one state with different needs and finding ways to customize what we deliver in services to the needs of the regions.”