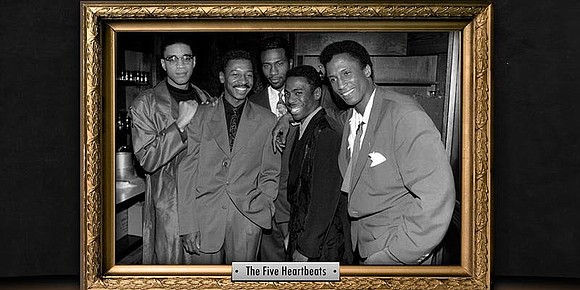 Robert Townsend the actor, comedian, writer and director is a legend. His work in the early ’90s opened the door for Black filmmakers, then and now. He let Hollywood know his tone of funny when he created the classic comedy “Hollywood Shuffle” (1987) and “Eddie Murphy Raw” (1987). That’s just a few examples of his work. A trained thespian, he also worked very successfully as a stand-up comic and appeared on “The Tonight Show,” starring (the late) Johnny Carson, a very distinctive accomplishment.

But it was Townsend’s (now classic) film, “The Five Heartbeats,” made in 1991, that really made Hollywood understand that his voice was unique and strong.

Townsend broke rules. He’s a rebel with a true purpose, and in his new documentary—“Making The Five Heartbeats”—he chronicles his journey without sugarcoating the events. It’s raw and that’s what makes the film truly beautiful. What Townsend wanted more than anything (and he achieved it) was to present a new image of African-American people in the cinema. Careful and respectful of his fan base, the documentary is also a sincere love letter to the movie’s fans, as well as a master-class on filmmaking.

His desire to advance the cultural aims of Black people on film opened the door to the African-American filmmakers working today. It’s almost like Townsend possessed a crystal ball at an early age. The vintage behind-the-scenes footage in the documentary is goosebumps rising on your forearms, chills up and down your spine spectacular and all deftly woven with personal stories with the five stars of the film (Townsend, Michael Wright, Harry J. Lennix, Leon Robinson and Tico Wells), along with co-writer Keenen Ivory Wayans, and the film’s bad guy you love to hate, Big Red (Hawthorne James).

In New York, “Making The Five Heartbeats” will premiere Monday, Dec. 3, at the Maysles Documentary Center at 6 p.m. followed by a Q&A. Friday, Dec. 7, it opens to the public and runs through Thursday, Dec. 13. Tickets are available Dec. 1 at

Despite having a temperature of 101, and struggling with the first flu of the season, I jumped at the opportunity to speak to Townsend by phone. Here is an edited conversation with the master storyteller.

AmNews: I’m sick today. Please forgive me if I sneeze in your ear.

Townsend: I hope you feel better.

AmNews: Thank you for all the things you’ve done, for helping people of color open so many closed doors in Hollywood. I mean Robert, you are a legend.

Townsend: (laughing) Thank you. You are very kind.

AmNews: Your film is brutally honest and yet so beautiful and moving. What do you hope young storytellers get from what you shared?

Townsend: Sometimes people think [in Hollywood] that everything is easy ... and the end of the day, as an artist, you have to fight for your vision. I think that a lot of people when they watch the documentary, they will realize that they are watching a master class.

If you believe and you work hard, you’re going to win. It’s just that there is work involved. I think [sometimes] when people look at the Black community, I think [some people] say “Well, I like Robert Townsend, but how does it work?” In this [“Making The Five Heartbeats”], you get a front row seat, right at the kitchen table with me, and you see how I create. And, I was very transparent. There were certain days [that] I doubted, and I didn’t know if [everything] was going to work. But you keep going. You never give up. I couldn’t give up.

At the end of the film, what really put it all in perspective for me, is there is one man that says that the film changed his life. And I think that real artists, hopefully, create things that will one day change people’s lives. That’s what really motivates me. It’s one thing to entertain people, [to] make them laugh, make them cry, but it can really change how they think, feel. Then I’ve done my job.

At the end of the day, I don’t do it for rewards. It’s just that I am going to always try and give it my best. Whatever happens, happens.