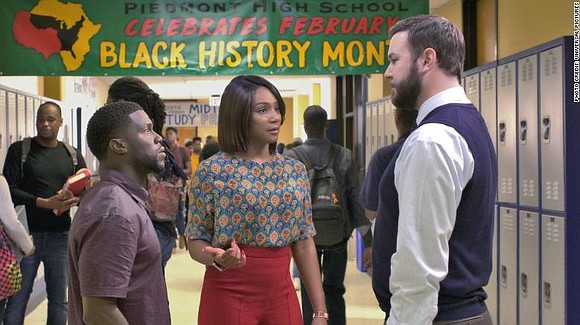 Here’s the good news: the success of “Night School” by director Malcolm D. Lee does not live or die by the whim of any critic because Lee understands what’s funny to the collective “us” and by “us” I mean folks, and by “folks” I mean Black folks.

You will laugh a lot because it stars Kevin Hart, one of the hardest and smartest men in Hollywood, and Tiffany Haddish, the ambitious funny woman who became a bona fide star after “Girls Trip” (also directed by Lee).

The title of the film “Night School” sums up the story. Teddy’s (Kevin Hart) life is on a downward spiral, and he needs to get his life back on track after a freak accident at his low-paying job as a barbecue salesman. Unable to tell the truth to his fiancée Lisa (Megalyn Echikunwoke), he does the most dishonorable (but comedic) thing and lies, pretending to have taken a job at a finance firm with childhood friend Marvin (Ben Schwartz). One of the jewels in this rags-to-maybe riches story is that, to get that job, all he needs is a GED—which he does not possess. To acquire that important piece of paper, he goes back to his old high school which is now run by the uber bright man (Taran Killam) that he used to tease.

Perhaps if Teddy knew, in advance, that the school’s nighttime GED prep program was run by the take-no-prisoners Carrie Carter (Tiffany Haddish) he would have had a long, hard chat with his inner child.

To say that there is tension between Teddy and his teacher is an understatement. It’s comedic war, to be frank, with an ensemble of students who all have their own brand of powerful comedy.

The back-and-forths keep coming like ping-pong balls and they are funny, insult-laced arguments that feel much more live improv than anything written by the six screenwriters that share credits on this screenplay.

There is a saying in Hollywood that the story must be on the page to work. Director-screenwriter Lee has produced many great stories using that high benchmark. He’s brilliant, but here the storytelling falls apart and with six screenwriters running through the story, well, it shows. But it’s still funny. Does that make sense?

Carrie does cure Teddy’s dyslexia, dyscalculia and the other difficulties that plague him by going old school and by “old school” she knocks the crap out of him in an MMA ring and shouts “focus” at him a lot.

Hart is a serious actor and generous with his costars and it shows. He understands that the riffs adapted from his stand-up routines only go so far. The film will do just fine at the box office and much, much better when it hits an OTT platform such as Hulu or Netflix.

If there is a sterling silver lining or rather a moral stance in “Night School,” it’s about trying to live up to your potential, no matter how many times you might appear to fail, and that’s an important lesson to be reminded of in life.