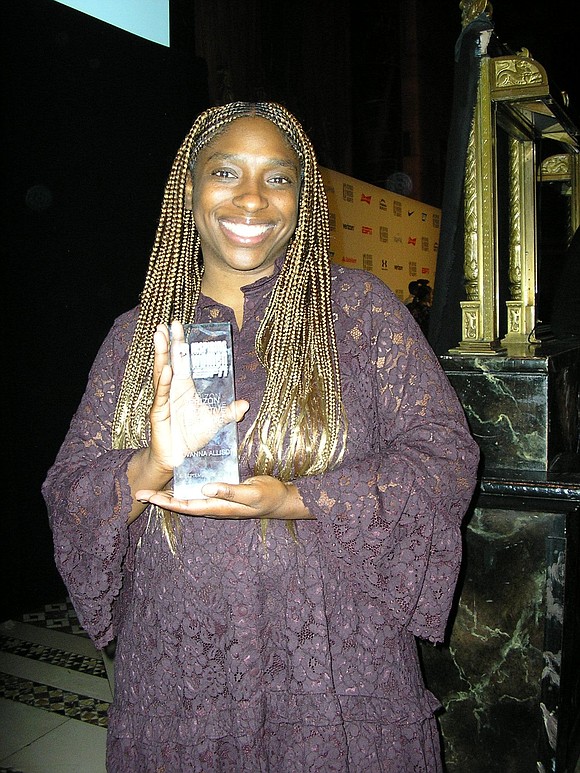 WNBA season might be done, but some of the league’s outstanding players as well as past greats of the game came together last week for the annual WNBA Inspiring Women Luncheon. The recipient of this year’s Inspiration Award was civil rights litigator Roberta Kaplan, a longtime champion of women’s and LGBTQ rights. She is best known for her work on behalf of marriage equality, arguing before the Supreme Court on behalf of the late Edie Windsor.

Although Kaplan said she was not a very good point guard, her own experiences with the sport of basketball proved influential in her life.

“It is an honor to be here with these women, who are so cool, brave and tough and who are showing girls today how to live,” said Kaplan. “Being a good sport and playing on a team are the two most important lessons I learned in my life. More and more kids need to learn those lessons.”

“It’s always exciting to hear what people are doing to inspire the lives of many people,” said Weatherspoon, Liberty director of player and franchise development. “What it’s about for all of us here is impacting lives.”

Wicks, the first WNBA player to come out publicly, was touched to see Kaplan honored by the league. “Roberta Kaplan is someone we all admire and respect for her work with Edie…and the visibility and human connection of that case,” said Wicks. “It’s a perfect space to honor her because the WNBA is all about being your authentic self and celebrating your gifts and talents with others.”

Now living in Houston, the city where she won four WNBA titles, Sheryl Swoopes was enjoying the basketball sisterhood. She voiced her admiration for Elena Delle Donne and A’ja Wilson as well as her former Olympic and WNBA teammate Sue Bird (all currently representing USA Basketball at the FIBA World Cup). “Not only is Sue a great player, she’s an incredible person and such a great leader,” said Swoopes.

“When the WNBA comes around with their Inspiring Women luncheon, you soak up all the greatness that’s around you,” said Cappie Pondexter. For five-time WNBA champion Rebekkah Brunson, it was great to be around people such as Swoopes and Weatherspoon, who paved the way for today’s players. “The goal in all of us is to inspire the people around us and the next generation,” said Brunson, who was seated with players from Christ the King High School in Queens.