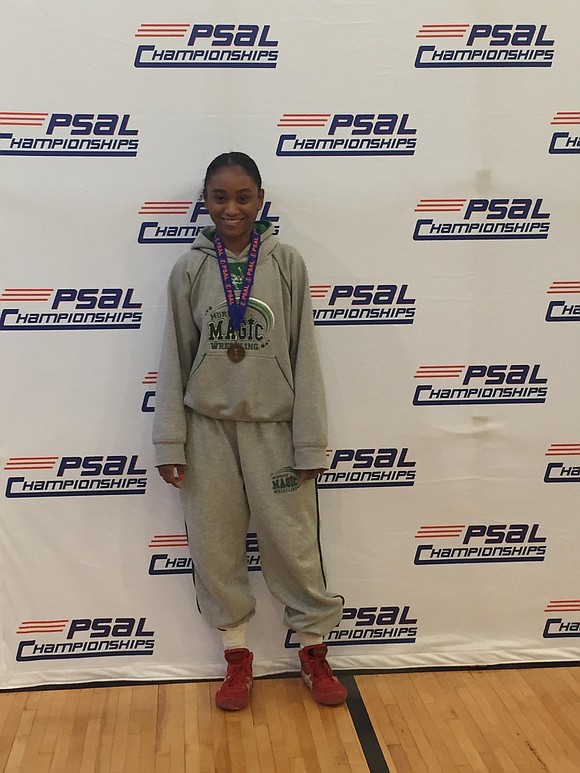 From the age of 6, Brooklyn native Kadejah Gentle loved watching professional wrestling, like the WWE. She found it fascinating, so when she got to Edward Murrow High School and saw the school had a wrestling program (Murrow Magic Wrestling), she was open to learning about amateur wrestling.

“When I first started, there were a few other girls, but the majority of the people there were guys, so we started wrestling with the guys during the boys’ season,” said Gentle. “I didn’t feel intimidated by it because I was having so much fun just being in that environment and being able to wrestle.”

Only 5-foot-1, Gentle doesn’t let her petite size stop her. Always active, as a young girl she took ballet lessons and also ran track. Even though she knew becoming a good wrestler would involve hard work and practice, she was determined. The coach allowed the girls to wrestle during both girls’ and boys’ seasons. She said the boys she beat were good sports, but some of their coaches didn’t take it so well.

“I started to love it even more and said, ‘I’m sticking to this all throughout high school and eventually through college,’” said Gentle, who also participated in Beat the Streets, an urban youth program that uses wrestling to help kids build their full physical, cognitive and social potential.

Last May, after placing third in her individual event at the 2018 PSAL Girls High School Wrestling Championships and helping her team take second place, Gentle signed a commitment with Nassau Community College. She knew she wanted to stay in New York, and a college tour helped her decide. Gentle is part of just the second year of the women’s wrestling program.

Training started a couple of weeks ago and the first match is next month. She said the coaches and her teammates are very helpful, and so far the transition to the college level is going well.

The dream of pro wrestling remains alive, but for now she is focused on getting the feel of college wrestling. Gentle, who is studying to be a physical therapy assistant, is open to transferring to a four-year college after her two years at Nassau are done.

“Even if I was around someone who didn’t approve of girls wrestling, I would try my best in a match and improve on my wrestling,” she said. “To be in an environment where people support it is nice.”