Baldwin would approve of Jenkins’ ‘If Beale Street Could Talk’ 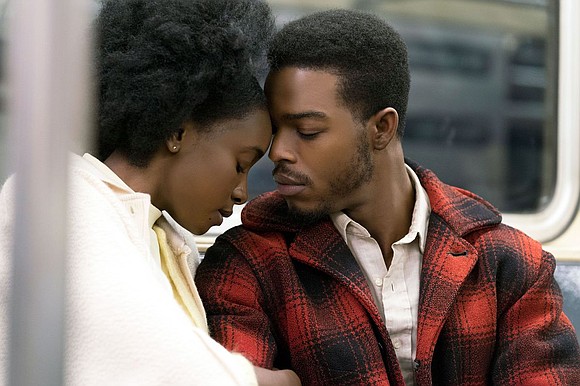 "If Beale Street Could Talk" Contributed

One of Harlem’s most beloved sons, James Baldwin, I think, would approve of the film adaption of his 1974 novel “If Beale Street Could Talk” that “Moonlight” writer-director Barry Jenkins has lovingly crafted.

Here Jenkins demonstrates his signature visual style with Harlem as the backdrop and almost a character in this emotionally intense story of young love that suffers from revenge, fear, hate, prejudice and agonizing injustice.

As a storyteller, he’s able to unleash deep rivers of emotion from his characters, with volumes of history exchanged in silent gazes.

The truth is the truth, and it hurts. Injustice is something the Black community knows much too well, and the lover’s painful experience is faithful to Baldwin’s strong and urging voice. It’s a very, very, very slow burn, and although it never actually reaches a satisfying climax, it’s beautiful to gaze upon.

Baldwin’s source material is rich, focusing the story on racial discrimination and unjust incarceration. Baldwin’s work also showcases Black dignity and our collective refusal to give up, no matter how much pain they try to inflict on us. Like a flower that finds a way to bloom through a sliver of a crack in the urban garden, we find a way to connect with love.

This film is Tish Rivers’ (KiKi Layne) story. Just 19 years old, she narrates the story, as she does in the book. She’s in love with Alonzo Hunt (Stephan James), aka Fonny, just 22 years old, a gifted woodwork sculptor who’s in love with her.

The film opens with a high shot, as if God himself is looking down at the lovers walking through Harlem, and it’s here that Tish reveals that Fonny is incarcerated for a crime he did not commit.

We feel that tug of the heartstrings when Tish says, “I hope that nobody has ever had to look at anybody they love through glass,” but statiscally for the Black and Brown communities, that’s highly unlikely. If you’ve read the book (which I have), you will recognize a lot of the dialogue from the novel.

The next scene cuts to the heart of the matter. While visiting Fonny in prison Tish tells him she’s pregnant, which brings a sincere smile. The fact that they are not legally married is irrelevant. They love each other and that’s enough.

Fonny is innocent but accused of raping a Puerto Rican woman. He has an airtight alibi that puts him nowhere near the scene of the crime. The frustration of watching another innocent Black man slowly being disemboweled by the judicial system is frustrating. Tish and her immediate family fight to clear his name, even though it’s clear from the audience’s point of view that it’s useless.

Tish draws strength from her no-nonsense mother, Sharon (Regina King), who views her pregnancy as a gift and who loves Fonny almost as much as Tish does. It’s small but intimate moments that make this film such a remarkable piece of art, such as when Sharon helps Tish tell her father Joe (Colman Domingo) and sister Ernestine (Teyonah Parris) the big news. The support dramatically shifts when Fonny’s family is told the news. They bring the drama delivered by his holy-roller mother (Aunjanue Ellis) and his rigid sisters (Dominique Thorne and Ebony Obsidian). Fonny’s dad (Michael Beach), however, loves Tish almost as much as his son does.

The golden moment happens early when Fonny invites an old friend, Daniel (Brian Tyree Henry), to dinner. The poor man has just completed two years in prison for a crime he did not commit, car theft, despite being unable to drive. In a moment of intimacy, Daniel reveals how terrifying his experience was inside, citing that white people “aren’t human.” It reminded me of a James Baldwin quote: “But the root of the Black man’s hatred is rage, and he does not so much hate white men as simply want them out his way, and, more than that, out of his children’s way.”

And poor Fonny still sits inside a cell. His only crime is being a Black man in America. Trying to prove his innocence, Sharon flies to Puerto Rico to try and get the rape victim (Emily Rios) to confess to being forced to pick Fonny out of a line-up by a racist cop (Ed Skrein)

The film ends on the same melancholy note that started “If Beale Street Could Talk,” but there is a lot to love, including the excellent behind-the-scenes talent that brings to life New York City’s Harlem in the early 1970s. The musical score—which is all jazz—might leave a lot of the audience unhappy. However, if you love that particular musical genre, then this film will have you levitating.