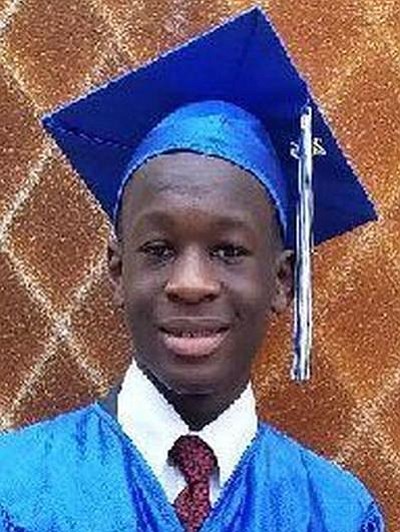 On Oct. 5, 2018, the Oyebola family held a vigil/viewing of Oluwadurotimi Oyebola. Oyebola was tragically shot and killed Sept. 21, in Brownsville, Brooklyn while playing basketball with his friends at Chester Playground.

The viewing took place at Guarino Funeral Home in Flatlands, Brooklyn from 6-8 p.m. Guarino Funeral Home was filled to capacity, with close friends and family wearing their “Everything for Timi” shirts and hoodies. People flooded in, and if you didn’t get there before 6 p.m., you were not able to find a seat. Many of Oyebola’s teachers, church members, coaches and law enforcement came to pay their respects as well.

To start, the viewing had a somber mood, people were grieving and mourning, but as the viewing continued, you could start to feel the spirits begin to lighten up.

LaGuardia High School gospel choir and Nataly Melo sung an amazing uplifting number that brought everyone to tears, followed by the spoken tributes. Each of the tributes that were made shared a common theme of Oyebola—his character.

Friends reminisced on the times they shared with Oyebola, raving about how easy it was for him to put a smile on their faces and make them laugh. Teachers spoke about how smart and caring he was, and how he had such a magnetic personality to those around him.

Dominic Pabon, the former marine who tried to save Oyebola’s life, was also in attendance at the viewing, where he spoke about the brief moments he spent with Oyebola.

He shared, “Although I never met Timi before that day, I felt like I knew him forever.” He later echoed the same sentiments toward Oyebola, stating, “Timi was a smart, loving, gifted child gone too soon.”

He stated, “Timi’s life should not go in vain. I urge his friends and family to use his life as an example, as he was an example to us. Encourage each other to turn away from the negative influence of this society and think about him and what he would want for you…He was a prime example what we should be striving for. He showed a love among everyone.”

David Oyebola also shared words about his son as well, stating, “He was a fun, loving, obedient child. He was in the wrong place at the wrong time.”

He feels as if this tragic accident happened because of the lack of parenting and guidance along with stressing that he urges parents to put the “love of Christ back into their homes.”

He commented, “If I were to see my son’s killer right now, I would let him know I forgive him, but I hope he has a relationship with the Lord Jesus Christ.”

Oyebola’s suspected killer was apprehended Oct. 3, giving peace to the Oyebola family. The family has been very vocal about wanting stricter gun laws so that this kind of tragedy won’t happen to anyone else’s child.

Even though his life was short, Oyebola was able to influence so many people along the way. Each and every person at the viewing had nothing but uplifting and positive things to say about him. Unfortunately, a life with so much promise and so much potential was cut short as he was doing what he loved to do most, playing basketball.