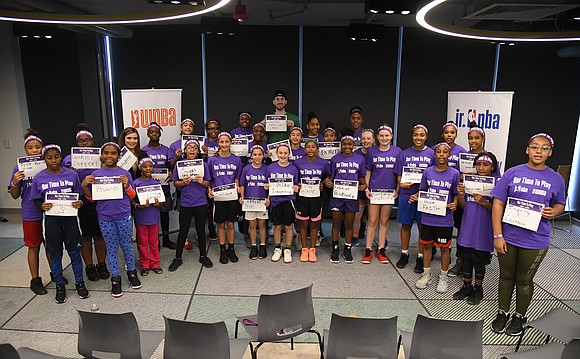 Last week was the National Basketball Association’s fourth annual Jr. NBA Week. There was a new component, the launch of Her Time to Play, a league initiative aimed at girls ages 7-14, hopefully inspiring them to see playing basketball as a way to stay healthy. Another goal is to jump-start the pipeline for female coaches and athletic leaders.

“We know the role that sports can play in helping girls build confidence and face the challenges of youth and adolescence,” said David Krichavsky, NBA vice president of youth basketball development. Since relaunching Jr. NBA in 2015, the NBA has noted the decline in girls’ participation in youth sports as they mature and wanted to develop a program that promotes participation.

Also, data indicate that less than 30 percent of youth sports coaches are female. “One of the pieces of feedback that we hear most often is that the role of female coaches cannot be overstated,” said Krichavsky. Part of the campaign involves inspiring women who have previously played basketball to become involved as coaches and mentors.

All 30 NBA teams hosted basketball events and programs, and there were special Her Time to Play activities. Boston Celtics forward and Her Time to Play ambassador Gordon Hayward and his wife, Robyn, hosted a Jr. NBA clinic for 30 girls that included on-court and off-court activities.

The New York Knicks offered several activities in NYC, including having a Junior Knicks affiliate girls basketball program play at halftime of a Knicks preseason game. The Knicks also hosted a basketball clinic and open discussion for 40 girls.

Her Time to Play has a 12-lesson curriculum created together with the Women’s Sports Foundation that addresses topics such as nutrition, teamwork, self-esteem, body image and bullying. WNBA All-Stars Elena Delle Donne, Brittney Griner and Nneka Ogwumike, who recently helped the U.S. national team win gold at the FIBA World Cup, provided their personal stories.

Krichavsky, the father of two young daughters, appreciates seeing NBA players inspire boys and girls. Jr. NBA has youth guidelines that recommend kids try more than one sport, so giving kids the inspiration to simply be active means a lot.

“We believe it’s really important for the girls to see female role models—as they do in our WNBA players—but also to know that men, fathers and husbands are supporting them as well,” said Krichavsky. “Our NBA players convey that message.”