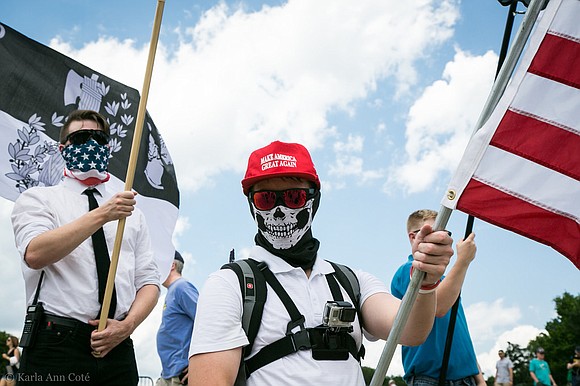 A leader of a hate group spoke at a New York GOP event on the Upper East Side last week. Chaos and violence ensued. Elected officials and activists have called for the arrests of those involved.

Last Friday, Gavin McInnes, leader of the Proud Boys, co-founder of Vice Media and a self-proclaimed “Western chauvinist,” spoke at an event hosted by the Metropolitan Republican Club in Manhattan. After the event, members of McInnes’ group took to the streets and ended up beating down protesters. One video, taken by freelance reporter Sandi Bachom, showed them kicking a couple of protesters while screaming homophobic slurs. The Southern Poverty Law Center identified at least three skinheads from a local far-right group called the 211 Bootboys in the video, including Joe Bola and Dennis Davila (who runs a hate music record label called United Riot Records).

Before the event, McInnes posted on Instagram that he planned on reenacting the assassination of Japanese socialist Inejiro Asanuma by teenage Japanese ultranationalist Otoya Yamaguchi while brandishing a samurai sword. He referred to the killing as inspirational. After Friday’s events, no Proud Boys were arrested, but several anti-fascist demonstrators were.

The Proud Boys are designated as a hate group by the Southern Poverty Law Center.

Loyda Colon, a representative for Communities United for Police Reform, said the New York Police Department and New York City Mayor Bill de Blasio need to crack down on the Proud Boys and wondered aloud why they let the violence happen in the first place.

“Let’s be very clear about what happened: white supremacists were given special treatment by the NYPD, and Mayor de Blasio did nothing to stop it,” said Colon in an emailed statement to the AmNews. “On Saturday, NYPD officers were on the scene during the Proud Boys’ bigoted attack. The NYPD officers let these heinous white supremacists walk away after they brutally beat anti-racist protesters. Instead of arresting Gavin McInnes and the Proud Boys on the spot, the NYPD arrested several anti-racist protesters. This is outrageous and wrong.”

Since being criticized for its slow call to action, the NYPD has released video of the men who engaged in violence, identifying nine men in particular that they are looking for.

At a news conference Monday, NYPD Chief of Detectives Dermont Shea said, “We have … nine individuals that we feel confident we can sustain charges of riot or attempted assault.”

But recently, McInnes—while speaking on Westwood One’s “Get Off My Lawn” podcast—praised the police department and claimed that the views of his group are shared by many of the city’s finest.

“I have a lot of support in the NYPD and I very much appreciate that, the boys in blue,” said McInnes on the podcast.

This week, New York State Gov. Andrew M. Cuomo called on the Federal Bureau of Investigation to look into the Proud Boys incident once the videos and reports were made public. During the announcement, Cuomo described the group.

“The Proud Boys are anti-woman, they’re anti-immigrant, they’re anti-Muslim,” said Cuomo. “They call themselves Western chauvinists and their agenda is to stop anti-white guilt. The Southern Poverty Law Center says they are a designated hate group. They are anti-equality, because they believe equality is negative for white people. They were a major participant in the Charlottesville rally, and they are a pro-Trump group and organized vociferously during the Trump election.”

Cuomo continued, “They have a history of violence; there was a prior incident in New York City when they appeared at New York University. They’ve had incidents of violence all across the country, in Charlottesville, in Portland, in Berkeley. And violence is part of their agenda.”

Cuomo also suggested, while speaking as a guest on the Rev. Al Sharpton’s “Keepin’ It Real” radio show, that even inviting the Proud Boys to an event was a cynically and politically motivated move.

Although most elected officials have denounced the white supremacist group for inciting violence, New York GOP Chairman Ed Cox played the game of “both sides do it” and said the governor, the mayor and New York City Council Speaker Corey Johnson should denounce all political violence, comparing anti-fascist vandalism to the Proud Boys’ physical violence.

“Instead of joining together to outright reject political violence, Governor Cuomo, Mayor de Blasio, Speaker Johnson and others have cravenly politicized these series of events, spread misinformation and insulted the integrity of the NYPD, who have conducted themselves with the utmost professionalism,” said Cox in an emailed statement. “We remain completely confident in the NYPD and committed to the safety and protection of all New Yorkers, regardless of race, religion, gender, party affiliation or views with which we may not agree.”

McInnes founded the Proud Boys in 2016 as a direct response to a song on Disney’s Aladdin soundtrack called “Proud of Your Boy.” According to McInnes, he heard the song at a children’s recital and thought it to be a fake and self-serving attempt to make boys apologize for being who they are. The Proud Boys believe they shouldn’t have to apologize for “creating the modern world.”

New York City Council Member Rory Lancman, chair of the Committee on the Justice System, which oversees the Mayor’s Office of Criminal Justice and the city’s five district attorneys, said McInnes and his group need to know that they’re unwelcome in the five boroughs and will be prosecuted for any illegal behavior.

“Hateful and violent behavior has no place in New York City, and those responsible must be arrested and prosecuted to the fullest extent of the law,” said Lancman. “Additionally, the Mayor’s Office of Criminal Justice must convene a task force including the NYPD, the district attorneys and other relevant agencies and offices, to develop a comprehensive strategy to combat white supremacist violence in our city and ensure that what we saw on the streets of New York last night never happens again.”