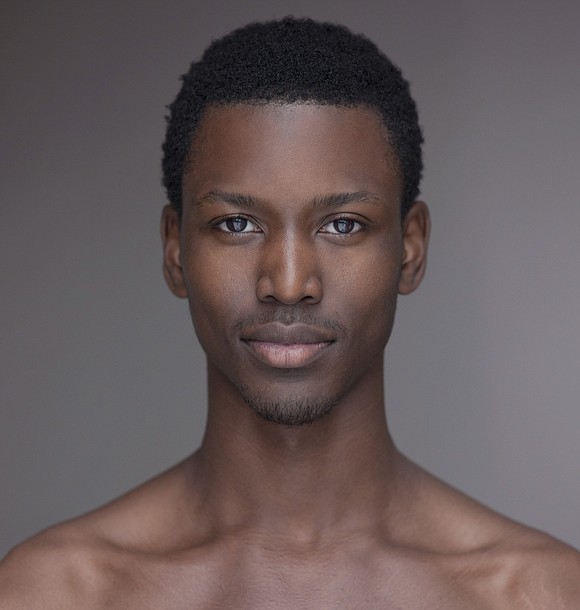 Even before he became American Ballet Theatre’s only African-American male soloist, when he was still a member of the corps de ballet, Calvin Royal III’s presence onstage seemed to command attention. Whether he was one of a group of dancers in “Swan Lake” or another iconic classic or in a contemporary work by an up-and-coming choreographer, he stood out. Aptly named, Royal’ seemed aristocratic even as he seemed to exude warmth and humility. He was regal.

At 6-foot-1, Royal’s deep, rich chocolate-brown skin, high cheekbones, long lean limbs and commanding presence capture one’s attention as his every move seems to etch memorable images in thin air. He seems at ease whether he’s dancing classical, neo-classical or modern works in ABT’s varied repertory. In fact, that variety, whether reflected in the composition of the only major American ballet company with a Black female principal—Misty Copeland—or something else, is what Royal says he loves about ABT.

He was 14 years old when he began to study ballet in his hometown of Tampa, Fla. It was a little late by ballet standards, but thanks to perseverance, supportive parents and a particular teacher, who saw potential and encouraged it, Royal ended up winning a major ballet competition and won a scholarship to the Jacqueline Kennedy Onassis School, a training ground for ABT.

“Before even seeing the company, I’d heard so many things about ABT.” Royal said. “Dancers from all over the world come here. It’s like a melting pot of different styles. It represents America, in a sense. And, I think the quality of what each individual dancer brings to the productions we do is something people really want to see.”

A glimpse of ABT’s increasingly diverse audiences, in comparison to other ballet companies, is proof he’s right. Since, 2015, when ABT Artistic Director Kevin MacKenzie made Misty Copeland its first Black female principal in its 75-year history, ABT’s audience has become more and more diverse. Thanks to the favorable impact on ticket sales others are taking notice and following suit, even companies that were historically resistant. It’s rewarding. But, even more rewarding is the palpable energy and excitement evident when this talent takes the stage, as Royal will do in five of the ballets being presented during ABT’s fall season at Lincoln Center, Oct. 17 to Oct. 28.

During a conversation sandwiched between rehearsals at ABT’s Lower Manhattan headquarters, Royal made it clear the audience wouldn’t be the only ones excited about the ever-widening possibilities.

He said, “I’m in five ballets this season and three of them are new for me—Twyla Tharp’s ‘In the Upper Room,’ Jerome Robbins’ ‘Fancy Free’ and a new Michelle Dorrance piece.”

Royal noted that he’s also performing in Alexi Ratmansky’s “Songs of Bukovina” and Jessica Lang’s “AfterRite.” He said, “The Dorrance piece seems to fit me like a glove, even though I’m not a tap dancer and I’ve had one tap class in my life. But she’s creating this piece to Duke Ellington, and my parents and grandparents loved his music. So jazz, for me, always felt comfortable. I heard it a lot growing up. So while we’re learning things like the Lindy Hop and while I’m learning movements and rhythms I may not have explored before, it feels like it’s in me.”

Twyla Tharp’s “In the Upper Room” is another dance that’s thrilling and new, Royal said, pointing to its physically demanding “dynamic athleticism.”

“It’s like running the marathon,” he added, recalling seeing it for the first time some eight years ago when he first joined the company.

Of the process unique to dance in which works are transmitted most effectively not by written text, musical score or even totally by film or video recording, but by memory from body to body, he said, “It just completely swept me off my feet. I got chills, it was so moving. Now, being on the other side of it, learning it from some of the dancers who it was created on, it’s really such a privilege because as they translate the movement to you they share what it felt like to have it in their bodies and once it’s passed to you they give you the freedom to bring your own feeling to it.”

The conversation sparked a memory of his performance some months back, when he and New York City Ballet ballerina Unity Phalen performed in a tribute at Columbia University to New York City Ballet’s first Black male principal dancer, Arthur Mitchell.

“For me, even the little nugget of time I had with Arthur was such a privilege,” Royal said. “Being on the stage dancing Balanchine’s ‘Agon,’ the ballet that was created at a time when our country was experiencing such racial turmoil, and 50-plus years later to be performing the duet that was created on him, well, as an African-American man it was such an honor.”

He continued, “I remember that moment when I saw him sitting in my line of vision. I thought, ‘I hope I’m doing this justice.’ But, it’s not just about dancing ‘Agon,’ it’s a feeling I have when I come to class, when I am in rehearsal, when I’m onstage, even when he’s not here, I hope that by continuing to do what I’m doing, I’m making him proud. I know that as a dancer, as a director and as an artist, he went through so much more than we could even imagine. That’s one of the reasons I feel like it’s a huge blessing to be here at ABT.”