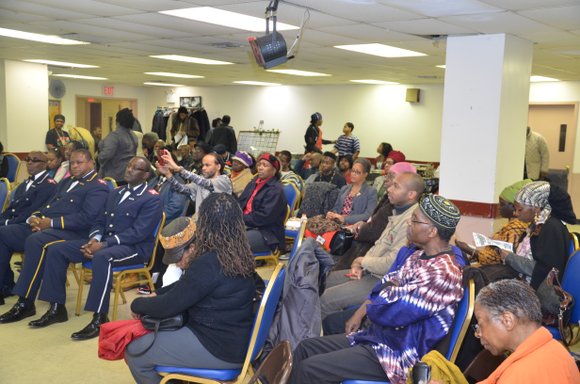 Monday, Nov. 5, 2018, the Black Solidarity Day Coalition will take to the streets in commemoration of the work of the founder Dr. Carlos Russell. Every year, the day before Election Day, Black Solidarity Day is recognized as a day of absence for Black people in the United States. It is a day to come together and make an assessment of history and current conditions and plan the way forward for Black people.

Coalition spokesman Omowale Clay of the December 12th Movement stated, “As we call Black People to consciousness this Black Solidarity Day, we commemorate the passing this past July of its visionary founder, Dr. Carlos Russell. In Douglas Turner Ward’s 1969 play ‘Day of Absence,’ where a small Southern town is crippled by the sudden and unannounced absence of its Black population, Dr. Russell saw a channel by which to demonstrate Black Power in our present conditions. ‘No Work, No School, No Shopping’ became the mantra for pulling Black people out of a system of which we are the victim, not the beneficiary. The Monday before the traditional Tuesday Election Day, would be when we as a people would demonstrate our power politically, economically and culturally.”

There will be three free community events held throughout the day sponsored and endorsed by a broad coalition of political activists, community organizations, educators, elected officials and clergy held in Bedford-Stuyvesant, Brooklyn.

From 10 a.m. to noon a “Teach the People” program will be held in front of Bedford-Stuyvesant Restoration Plaza at 1368 Fulton St. From 2 p.m. to 4 p.m. the “Our Streets!” march and rally will assemble at Restoration Plaza on the corner of Fulton Street and Marcy Avenue and take to the streets to amplify the effects of the ongoing ethnic cleansing (gentrification) of the Black community across the United States. And an evening “Don’t Count Us Out!” program at 6:30 p.m., focusing on the importance of the 2020 Census, will be held at Siloam Presbyterian Church, 260 Jefferson Ave., in Bedford-Stuyvesant.

Clay concluded, “Join us on this 49th anniversary of Black Solidarity Day and demonstrate the power of our Blackness, our unity, and our resistance to the rise of Trumpism. We Black!”