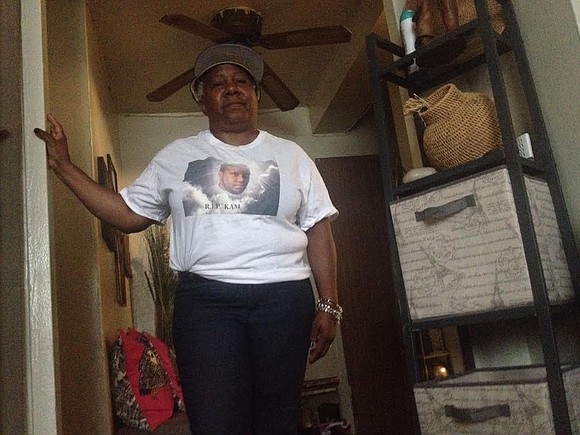 As the distress lingered for the 58-year-old mother, she turned to her community for help.

Mckay is among nearly 30 parents who are using anti-violence programs as a gateway to mental health care. Two programs, Not Another Child and The God Squad, have offered 100 families free peer-to-peer group therapy over the past seven years. The monthly sessions at Brightpoint Health in Crown Heights are led by mothers who have lost children through gun violence.

The groups’ liaisons, Pastor Gil Monrose, Oresa Napper-Williams and Natasha Christopher, occasionally use an on-call psychologist to mediate the conversation.

“It’s a different peace when you’re in the company of survivors,” said Mckay, a retired MTA employee from Brownsville, Brooklyn. “If we can’t get these guns off the street, we have to get our people together mentally to heal.”

Napper-Williams, the founder of Not Another Child, a group denouncing gun violence, said the survivors offer comfort.

“I know that a lot of families really think no one can relate,” said Napper-Williams, who lost her 21-year-old son, Andrell, to a stray bullet in 2006. “This is a place where they can let their hair down and say how they feel without being judged.”

The group’s only couple, Helen and Derrick Boddie-Khan, said the sessions offer solidarity.

“When you’re having a bad day, you can just call one of the people,” said Helen, 55, of Hollis, Queens, whose son, Cody, was fatally shot six years ago. “At any time of the day, they are willing to talk to you.”

Helen’s husband is one of the only fathers in the group. Over the years, he has built a rapport with several mothers, who are struggling to reconcile rage after a child’s death.

Napper-Williams advised Mckay to process her healing through Kameron’s birth, one of the few moments that still gives her joy. Last year, Mckay started Caps4Kams, a nonprofit providing knitted caps for premature babies at Brookdale Hospital in Brooklyn. Mckay knits 30 caps per week, which are then individually packaged and distributed to the hospital’s neonatal unit.

“It’s to cover our babies before they get into the streets,” said Mckay, who recalled her son’s recovery from jaundice as a newborn. “He was born in Brookdale Hospital and he transitioned at Brookdale Hospital.”

When new mothers join the group, Mckay finds herself reliving the trauma.

“You can spiral right back into it because the grief is so fresh,” said Mckay, who then removes herself from the room. “It’s a moment-by-moment living.”

For the past five years, Mckay has visited her son’s grave site each week. Now, she has started placing action figures on the tombstone. Kameron is survived by his 3-year-old daughter, Dakota.

“People say, ‘It gets better with time,’” she said while holding her grandchild. “It hasn’t for me. It just has gotten more real.”