The Sugar Hill Quartet to share their oral histories of St. Nick’s Pub at Bill’s Place 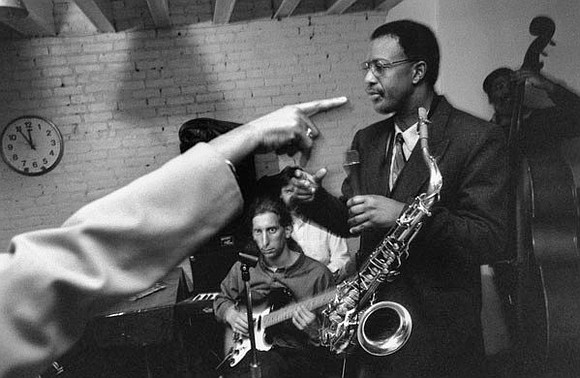 I first stepped foot in St. Nick’s Pub in the late 1990s. Never knew who you might see, sitting at the bar kicking back rum after rum, pouring libations on the floor to the ancestors. Said libation pourer was the late Leon Thomas, the yodeling, scatting jazz singer, Black nationalist and Yoruba priest.

“Mr. Thomas,” I said, sidling up to him on his barstool, “will you be singing tonight?”

He looked left toward the bandstand, and then right toward the door. Seemed to be waiting for Oshun and Elegba to emerge from the ether to offer their advice, so he splashed the floor with more liquor, seeking their favor.

Never knew who you might see, sitting at a table all snuggled up with a paramour. He was hiding in plain sight, because he’s a married TV judge and everybody knew who he was anyway. And they knew the paramour, too, because she is a well-known actor. I won’t bother to mention any names, because what goes down on Sugar Hill, way up in Harlem, stays on Sugar Hill, way up in Harlem.

Never knew who you might see, strolling in the door, squeezing past rows of people at the bar, three deep at 2:45 in the morning. Just when I was ready to walk up St. Nicholas Avenue to go home, Louis Nash sat at the drums. Nobody with any sense leaves when Nash is getting ready to hit. Thomas and Nash might not be household names to the rest of the world, but in the loosely knit jazz confederation they are. Citizens of the jazz nation aren’t only concerned with the names of the bandleaders. We have to know the names of the “sidemen”—the musical collaborators—because they are as important as the headliner. They effect the alchemy.

The one constant at the Pub Monday night was the house band, the Sugar Hill Quartet. They were the jam session’s foundation, which is why people such as Olu Dara, Stevie Wonder, Wynton Marsalis, Cassandra Wilson, James Carter and Broadway’s Lillias White would come for the hang and wind up onstage. Savion Glover tapped to the band’s impromptu accompaniment. Gregory Porter got his start there. The Sugar Hill Quartet was able to accompany the famous people who sat in, because the members are great musicians. For nearly two decades, reedman Patience Higgins, pianist Marcus Persiani and drummer David F. Gibson held it down. The bass chair, since the death of Andy McCloud, rotates, but each member of the group is an accomplished presence in various genres of Black music, including the upper echelons of jazz, R&B and Latin music.

The range of their experience is astounding. Higgins, the leader, has performed with everybody from Wilson Pickett to Esperanza Spalding when she played at the White House for the Obamas, and he played a sweet solo on “On the Sunny Side of the Street.” Persiani has played with everybody from Curtis Mayfield and the Impressions to Jerry Gonzales. Gibson is a big-band drummer and a small-ensemble player who has kept time with folk from Frankie Beverly to the Count Basie Band.

The audience at the Pub were community folk, instrumentalists, vocalists and wordsmiths, who were, sometimes, one in the same person. The place drew all kinds of people, for various reasons. The old jazz heads who might have been around during Bird’s time, professors, gangsters, deacons, dancers, dealers, actors, numbers runners, undercover cops, doctors, FBI agents and busloads of Japanese tourists. All manner of whatever could be going on whenever. Victor Edwards, a long-term Harlem resident, said, “The Pub was raw; straight no chaser.”

When it burned down March 22, 2018, I felt as though I’d lost an old friend, although I had not been there in years, because it closed down for good around 2007. Every now and then, the grapevine said that it would reopen soon. It never did, except for a film shoot. Word on the street is that the film crew moved a case of liquor bottles too close to the furnace, and that caused the fire.

But Monday nights at the Pub would not have happened without Berta Alloway, the producer. The first time I saw Miss Thing fall in the place, grand as a Harlem woman in charge, she walked like jazz would walk, on a midtempo, straight-ahead tune, if jazz had legs. She wore a fedora and dragged her mink coat behind her on the floor. The only other person in the whole wide world who I have ever seen do that was Aretha Franklin, so that oughta tell you something about Alloway’s whole vibe. She was the Queen of the Pub, adorned in eyelashes and wearing a serious look on a pretty brown face, and she was sharp. She slayed.

The Pub is a storied place. Saxophonist Sonny Rollins said, “You kids were soaking up all of the musical energy that’s been in there for all of those years. That was Luckyeth Roberts’ place. It was called Lucky’s Rendevous.” Roberts was a pianist who lived right near his club that hosted some of the great stride players of that era.

If one had a vague notion or deep intellectual knowledge that the music we have come to call jazz came out of the Black community, when one experienced the Pub, one left with an indelible emotional imprint of the truth. In that small, crowded room, I sat hip to hip with happy Black folks talking and drinking and being transported by the music. I always felt the ancestral presence that Thomas was conjuring up near the front door. I could feel the energy that Rollins spoke of. There are few things in life better than when a player turns a phrase and the audience erupts, hollering hosannas up to bandstand, clapping, whistling and stomping. That communal way—the players giving, the people receiving—is how jazz came into being. The Pub was a continuation of that organic outgrowth. I loved sitting there in the middle of the night, listening to Patience and them—the stars, the unknowns, the wannabes and the ain’t never was.

When the Pub closed, the band moved down to Minton’s. When that iteration of Minton’s was over, the band moved up to the Lenox Lounge. Then they moved to Smoke, which wasn’t in Harlem, but it was close enough. In each and every place they played, because of their outstanding musicality and adaptability, they attracted the most accomplished jazz artists in the world, who’d come to sit in.

Uptown and in places like the Hill District in Pittsburgh—another place rich in Black music history—there are few places for groups such SHQ to play, because the “G word.” The quartet is the longest-running house band in Harlem, and kept up the Monday night jam sessions that began at Minton’s with Monk, Bird, Dizzy and others. SHQ descended from that tradition, and should be honored as such, which is why gathering their oral histories is so important.

Bill Saxton was also “in residence” at the Pub, for some time Friday nights. He’s a well-known sax practitioner. He and his wife, Theda Palmer Saxton, Ph.D., own Bill’s Place, a former speakeasy where Billie Holiday sang some of her first gigs in New York City. He was born and raised in Harlem, so he is historically significant in this moment of community transformation, because his sound was created, in part, by listening to the legendary place of his birth, of coming of age there. The ‘hood has changed.

Mindy Fullilove, M.D., is a professor of Urban Policy and Health for New School University. Her work is dedicated to the psychology of place. She said, “The segregation of Blacks in Harlem when whites didn’t need it, and pushing them out now that they do is a vital part of the long story of inequality.” Among other things, jazz helps people contend with the emotional fallout of inequities.

For a while, the quartet had no place to play on a regular basis, but thanks to Alloway, they play on Mondays at the 735 Club, which is named for its address, right on St. Nicholas Avenue near 147th Street. That sounds like a happy ending, but who knows what will happen if and when the building changes hands or the residents begin calling the police with sound complaints or other problems that would limit the band’s options for places to play in the community. Maybe for good.

Karen D. Taylor is the founder and executive director of While We Are Still Here, and director of a feature-length documentary, “In the Face of What We Remember: Oral Histories of 409 and 555 Edgecombe Avenue.” She is also an essayist, editor, poet and sometime vocalist.