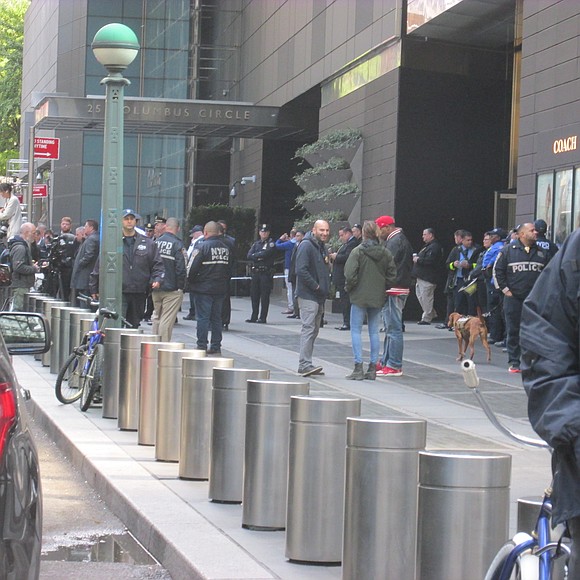 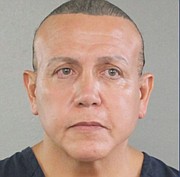 The FBI arrested 56-year-old Cesar Sayoc Jr. of Aventura, Florida in connection with the numerous pipe bombs sent this week to Democrats and critics of President Donald Trump.

Sayoc was arrested after his fingerprint was found on a device sent through the mail meant for Congresswoman Maxine Waters.

Speaking at the Department of Justice in Washington, D.C. on Friday, FBI Director Christopher Wray said that 13 IEDs were sent to various individuals across the country. Each device consisted of roughly six inches of PVC pipe, a small clock, a battery, some wiring, and what is known as “energetic material,” which is essentially potential explosives and material that gives off heat and energy through a reaction to heat, shock, or friction.

"What I can say is that this was a nationwide investigation of enormous scope and of the greatest importance," Wary said. "Our investigation ranged from New York to Delaware to Maryland to the District of Columbia to Florida to California. As it always does, the FBI responded to this threat with every resource we’ve got, including our Joint Terrorism Task Forces, our Counterterrorism Division, and our world-renowned experts at the FBI Lab in Quantico."

Timeline of where and when bombs were found

There has been an alarming appearance of suspicious packages and at least one containing an explosive device.

U.S. Representative Hakeem Jeffries said, “In light of the vile acts of attempted political violence and domestic terror directed at two former Democratic presidents, former high-level cabinet officials, critics of the current administration, a progressive donor and the media, America needs responsible leadership from the president and elected officials at all levels of government. It is time to cease and desist with the hateful rhetoric directed at political adversaries, conspiracy theories about a deep state, attacks on the FBI, claims that the press is the enemy of the people, poisonous name-calling and mean-spirited mass rallies. Without leadership from the top, America can never come together. It is my hope and prayer that all sides will conclude that enough is enough.”

A number of elected officials, news outlets and social commentators stated a direct correlation between the language, ideas and tone used by the current administration in charge of the federal government and the series of bombs and suspicious packages sent around the nation.

Wednesday morning Oct. 24, Americans woke up to news of a pipe bomb sent to the Chappaqua, N.Y. home of Bill and Hillary Clinton and intercepted by the Secret Service Tuesday night. Another addressed to former President Barack Obama was intercepted in Washington, D.C. Similar packages were sent to former U.S. Attorney General Eric Holder, Congresswoman Maxine Waters and former CIA Director John Brennan. The package meant for Brennan was sent to the New York offices of CNN, triggering the evacuation of the Time Warner Center at Columbus Circle. Brennan is a contributor to MSNBC and has never contributed to CNN.

CNN Worldwide President Jeff Zucker praised his employees for keeping up with their workday despite the distractions.

“The investigation in the building continues, and we are working closely with local and federal authorities as they do their work,” said Zucker in a statement. “We still do not have any update as to when we may be able to reopen the building, but I will continue to keep you updated. Again, I want to thank all of you for your amazing work today—in New York and around the world.”

Columbus Circle was put on an alert status.

Reports indicate that the device was a pipe, with wires and black electrical tape. The NYPD Bomb Squad secured the device and removed it for investigation. Late Wednesday, officials said the device was capable of exploding with a deadly outcome.

The FDNY, NYPD, FBI, New York State Police and Secret Service descended on the Columbus Circle area, where thousands of people were ordered to evacuate the Time Warner Center and other buildings. Dozens of law enforcement officials were on 58th Street, and streets near the building were blocked off.

“This clearly is an act of terror attempting to undermine our free press and leaders of this country through acts of violence,” he said. “I want to make very clear that the people of New York City will not be intimidated, that we’re going to go about our lives undeterred because the very concept of terrorism is to change us and we will not allow that to happen.”

Gov. Andrew Cuomo was also on scene and said during the news conference, “Terrorism only works if you let it work. What they are trying to do is scare us and destabilize us, and we will not allow that to happen. We are New Yorkers. We are smart. We are tough. We are resilient and we will not allow these terrorist thugs to change the way we live our lives.” He elaborated more on the package sent to the Clinton’s. He assured New Yorkers that safety is a top priority.

One woman said to the AmNews that she thought the announcement of the public address system was a test. She was able to back into the building just after 1:30 p.m.

“I was on the 14th floor,” she said. “I was working and an announcement came over the system telling us we have to evacuate immediately per the NYPD. My heart started racing because something real was happening.”

Gary Fritz was scheduled to play Wednesday morning with his jazz band for a breast cancer awareness event. The Harlem resident said he was on the second floor and that he received numerous calls from friends when news broke about what happened.

“We got out as fast as we could,” Fritz said. “They told us they were evacuating the building and that it wasn’t a drill. I was getting calls from everyone who was listening to the news asking me where I was. I posted on Instagram that I was here and that I was going across the street until they figured out what happened.”

Tyrell, who works at a restaurant in the Turnstyle Underground Market in the 59th Street-Columbus Circle station, told the AmNews that people were also evacuated underground.

“Someone who works down here told us we had to evacuate,” he said. “We had to go towards T.J. Maxx two blocks away. I just wanted to evacuate.”

Law enforcement allowed people to go back into the Time Warner Center just after 1:30 p.m.

Monday, Oct. 22, 2018, the Bedford, N.Y. police received a call that a suspicious package was found in the mailbox near the estate of billionaire investor and philanthropist George Soros. An employee of Soros discovered the parcel, which was given to the police who denoted it in a nearby wooded area. Soros, known for his contribution to worthy causes and the Democratic Party, was not at the estate.

A package sent to Gov. Andrew Cuomo was reported not to be a bomb or incendiary device. The delivery of the packages has activated the FBI’s Joint Terrorism Task Force, which is investigating the reports and packages. Several of the packages were in manila envelopes and had stamps and signatures on them and had the address for the offices Florida Congresswoman and former Democratic National Committee Chair Debbie Wasserman Schultz on them. Holder’s package was sent to the wrong address and “returned” to the offices of Schultz.

All the targets had another thing in common: they’ve been publicly criticized by President Donald Trump and they are open critics of Trump.

White House Press Secretary Sarah Huckabee Sanders posted a statement on behalf of the president on Twitter. The statement, typed up on the iPhone Notes app and screen shot for the public, expressed disappointment at the suspected bomber.

“We condemn the attempted violent attacks recently made against President Obama, President Clinton, Secretary Clinton and other public figures,” read the statement. “These terrorizing acts are despicable, and anyone responsible will be held accountable to the fullest extent of the law. The United States Secret Service and other law enforcement agencies are investigating and will take all appropriate actions to protect anyone threatened by these cowards.”

But one could say that the political atmosphere created and rhetoric spewed by President Trump since he took office has leaned toward the outrageous. During a recent rally in Montana, he called Democrats a threat to the American family, he has openly criticized media as an enemy of the people (CNN wasn’t included in Sanders’ statement) and he still basks in chants of “Lock Her Up!” at rallies.

At that same Montana rally, Trump praised local Congressman Greg Gianforte who assaulted a journalist in 2017. “Any guy that can do a body slam...he’s my guy” Trump said.

Wednesday, at the signing event for the Opioid Recovery and Treatment Bill, Trump said whoever was responsible for the package bombs would be prosecuted.

“The full weight of our government is being deployed to conduct this investigation and bring those responsible for these despicable acts to justice,” said Trump. “This egregious conduct is abhorrent to everything we hold dear and sacred as Americans. We’re extremely angry, upset, unhappy about what we witnessed this morning. And we will get to the bottom of it.”

“These terroristic acts target current governmental dissenters,’ Marquez Claxton, director of the Black Law Enforcement Alliance, told the Amsterdam News. “Civil discourse and disobedience has devolved into political sycophants carrying out their cult’s objectives. The current political climate is rude, divisive, mean-spirited and at times threatening. The fringe has now taken control of the body politic and violence is one of their tools.”

Hillary Clinton was in South Florida this week raising money for Andrew Gillum’s gubernatorial campaign and congressional nominee Donna Shalala, a longtime friend who recently served as the head of the Clinton Foundation. During a Shalala fundraiser at the Coral Gables Woman’s Club, Clinton thanked law enforcement and spoke about a time of “deep divisions in our country.”

“Many of you and others across our country have asked about me and my family, and I’m very grateful for that,” said Clinton. “We are fine, thanks to the men and women of the Secret Service who intercepted the package addressed to us long before it made its way to our home.”

“Unfortunately situations like this one are probably going to become more of the norm, but historically law enforcement has been able to contain them,” said Philip Banks, the NYPD’s former Chief of Department. However, the president of City Safe Partners predicted, “The past in this city dictates that the NYPD will be on top of it, and we are going to be OK.”