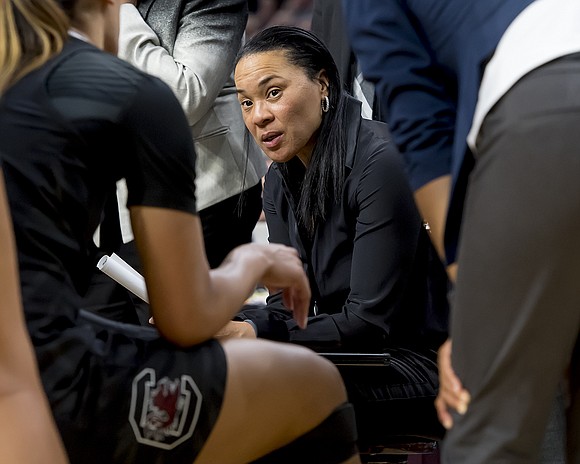 The FIBA Women’s Basketball World Cup begins Sept. 22 in Spain. In Dawn Staley’s first assignment as head coach of the U.S. women’s national team, she is training players and overseeing exhibition games while waiting for some players to either finish or recover from their WNBA seasons. Thus far, Tina Charles of the New York Liberty is the only player in training camp with Olympic experience, but others have either played with USA Basketball or internationally.

“We have a staff that understands what we’re faced with, so we’re forging ahead,” said Staley, a three-time Olympic gold medalist as a player who served as assistant coach at the 2008 and 2016 Olympics. “The players that we get, they come in and pick up things fairly quickly and we keep rolling.”

She elaborated, “These are the top players in our country; they bring a certain level of culture to the game in which they know they have to be able to listen and grasp concepts on both sides of the ball. It helps when you’ve got the best players who are extremely motivated. We’re trying to perfect things knowing that we have a short window to prepare.”

One of the young players currently with the team is A’ja Wilson, 2018 WNBA Rookie of the Year, who played her college basketball under Staley at the University of South Carolina. Over the course of training camp, which began Sept. 3 at USC, several college players have been invited to try out with the team.

While hopes are high that four-time Olympic gold medalist Sue Bird will join the team after the WNBA Finals, one player who won’t is point guard, two-time Olympian Lindsay Whalen, who retired at the end of her WNBA season. That creates opportunity for guards such as Layshia Clarendon and Odyssey Sims.

“What we’ll have to do is take the best point guard that can facilitate, that can have a great understanding of what we need out there on the floor,” said Staley. “It may take a few of them to give us the comfort that we need in knowing that we have all those bases covered. It’s good to have a variety in training camp so we can see exactly who can either add to their game or know how to balance out the people they’re playing with on the floor.”