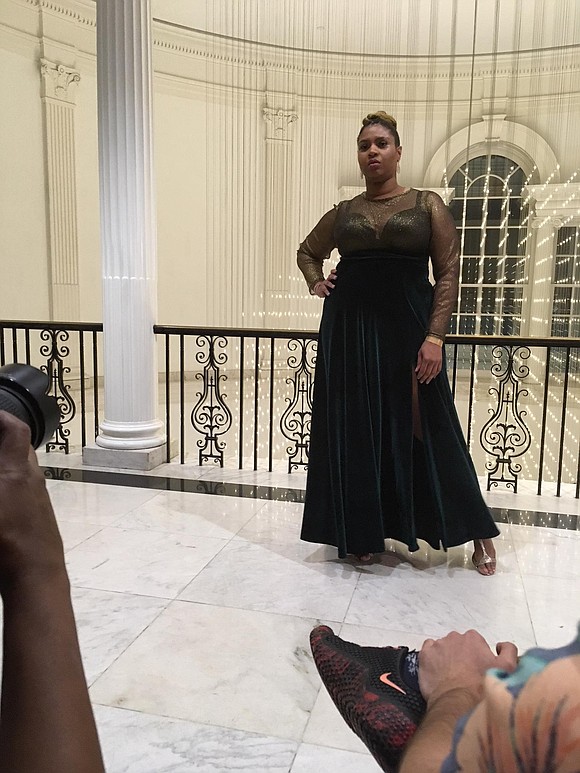 Harlem Fashion Week kicked off Sept. 6, 2018, with an opening night charity gala that was quite a success. HFW seeks to create a cultural platform through the art of fashion. Author Constance White, Adama Paris, Qubilah Shabazz and Eugene Adams have used their talents, influence and ingenuity to open doors to diversity. This mission—fashion with a message—is the foundation of HFW. The proceeds from the events go to support two charities: Uptown Dance Academy, located in Harlem, and the Senegalese American Bilingual School, located in Senegal, West Africa.

Sept. 8, HFW presented their 21st Century Fashion Cultural Experience, with three fashion shows at the Museum of the City of New York. The evening showcased 20 designers, with three guest designers.

Designer Adama Paris opened the first show with unique designs that reflected her African roots with a Eurocentric flare. Her straw hats were stunning and set off outfits for men and women. Her attention to detail included dramatic draping and overlapping panels over pants. Her prints were African-inspired.

Ghanaian-born designer Alhassan Toure began his career as a tailor in Harlem, working on West 125th Street, and has become one of the most sought after designers. Clients include P. Diddy, Swizz Beatz and Chris Brown.

Peru is an emerging designer who designs for the Teyanna Taylor brand. In this segment, there were collections shown by Flowerbaum, Noir Bl’k, Kitara Designs, Constance Dee and House of Q. HFW also featured Rebdolls, an international brand that caters to plus-size women. For the show, makeup was provided by Sephora, Columbus Circle.

The best dressed person at the show was Acouda Williams, wearing a two-piece multipatch leather pantsuit with zippy details, designed by www.dollskill.com. Fashion shows always start in the audience, with folks just waiting for the show to begin.

Some other highlights: N/USA’s sheer, sexy pieces caused a stir. For day or evening, their white V-neck dress with long flute sleeves looked smart. There were several red-carpet or evening styles. The one-shoulder black dress accented with tulle and ruffles glittered in elegance. Their bolero jacket was an important accessory in this collection. Julianne D’Errico showed sleek, icy-chic styles with leather fringe embellishments. Colors were gunmetal and black, along with multicolor digital prints. For evening, her one-shoulder black gown stunned the audience with a side split to the hip. Aisha Nasa delivered several Eastern-inspired, two-piece gown looks and skinny pants hits. In her collection, there was a beautiful, silver gown with gold trims. Her lamp-shade earrings were news.

Mansah Clothing, a family-oriented line of African prints, received applause. Mainly for the fuller-figure, there were jumpsuits and elegant gowns. The skirts for adults and children received applause. For men, there were interesting printed shirts in bold colors. This designer modernized her looks with bands of stripes around the waist that added a modern sportswear look. It was very well-received. Asian designer Jyuri Lee provided outstanding outerwear. Her looks were very fashionable, yet functional.