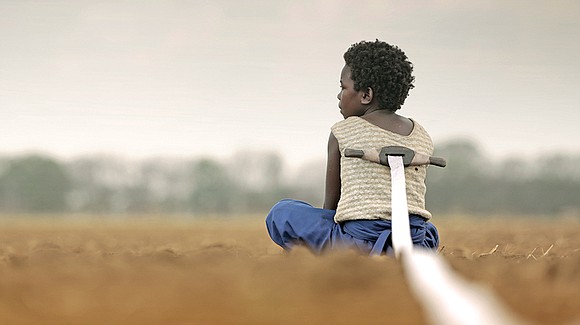 Throughout history, for intelligent women with a strong will and a desire to have the most out of life, these qualities alone have been enough to brand them as “witches”—evil beings to be feared, restrained and destroyed. That is history, the fear of women, and despite wanting desperately to see this mistreatment as being “in the past,” it’s not.

Zambian-born, Welsh-raised director Rungano Nyoni steps boldly into this bizarre world, awash in superstition, in modern Zambia. This film has been gathering critical acclaim and fans, hitting the major film festivals and getting people talking about the underpinnings that drive this movie.

“I Am Not a Witch” is the story of a young Zambian girl who is labeled a witch and exiled to a witch camp, where she is repeatedly exploited, and then, oddly, embraced. Perhaps, on the one hand, people secretly yearn to be close to the supernatural while, on the other hand, wanting to be part of the group that “removes” the “evil” from their community. Either way, it’s Nyoni’s eye that makes this small film worth a viewing.

From the very opening of the film, with a surprising Vivaldi score, a group of tourists comes to ogle these witches, with one very large white woman in this group. It’s eerie, like these women are in “cages.” Here they sit behind a flimsy fence, rows of them, all wearing white paint on their faces, each tied to a slender strip of white cloth that is linked to a spindle.

Sixty years ago, Belgium displayed people from the Congo for the 1958 World’s Fair. This horrible practice, for lack of a better word, was done around the world in the 19th, 20th and 21st century, showcasing so-called primitive cultures to emphasize the cultural differences between Europeans of Western civilization.

In “I Am Not a Witch,” we go inside the “witch camp” (these places do exist), and it’s a place of exile that seeks to break the women’s spirits. These women are not wanted in their communities.

When a young girl trips and falls while carrying water on her head and observes a tiny, boyish little girl, Shula (Margaret Mulubwa), she blames her clumsiness on Shula, calling her a witch.

Perhaps their community is intimated by Shula’s attire: a ragged T-shirt with the word “#bootycall” written on it. In no time, she’s spirited away and tethered to the earth. Why? These superstitious captors fear that the women will fly away, and that if these “witches” undo their bindings, they will turn into goats. The women are tattooed with symbols on their foreheads. Then they’re made to use their “powers” to identify thieves and create magical talismans, all to profit Tembo (John Tembo), the manager of the witch camp.

Shula is not a witch. She’s a young woman whose spirit is strong and distinctive. In terms of character, there isn’t a lot of motivation shared. We know very little about how Shula really feels, but perhaps that’s by design. Nyoni, the director, was inspired to make this movie after a research trip to a witch camp in Ghana.

The film is filled with cultural condescension, hatred and fear toward women, and it’s set up for laughs aimed at the people who harbor these “silly” superstitions.

“I Am Not a Witch” is beautiful to look at, thanks to the director of photography’s (David Gallego) work. There is a lot to say about how the world mistreats women—strong women—and Nyoni’s approach might seem very flimsy when approaching such a large tapestry, but in the end, her film is invigorating and provocative.

It’s important to keep in mind that this film is Nyoni’s debut, and it’s exciting to think about what’s ahead of her.

“I Am Not a Witch,” written as well as directed by Nyoni, is now playing.