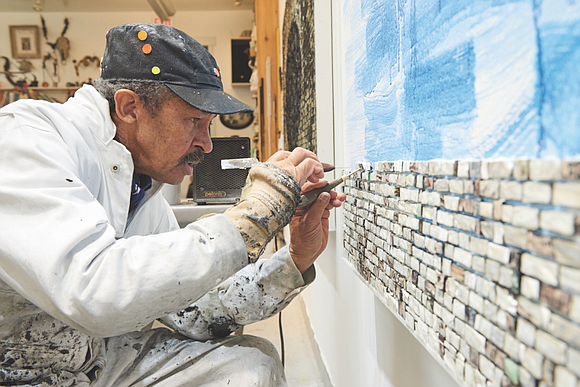 When it came to my attention that a fresh body of sculpture by Jack Whitten was slated for the Met Breuer, I hastened there, although the exhibit is scheduled to stand until Dec. 2. Whitten died January 20 at 78. His “Odyssey” collection at the Breuer represents his works from 1963 to 2017, but the sculpture is only a portion of his productive artistic life.

Accompanying the exhibit is a book of commentators who provide insightful captions and extended pieces on most of the artwork on display. Most rewardingly is the chronology and a long interview at the end, where we get the vital statistics of an artist not too eager to share his background and history.

Whitten was born Dec. 5, 1939, in Bessemer, Ala. His father was a coal miner and his mother a seamstress, who later opened her own kindergarten school. When his father died in 1944, his mother was left with seven children to raise. He attended Carver Junior High School and took classes in music and shop. In the book, there’s a photo of him in a tree where he had built a house.

As a student at Tuskegee Institute, Whitten worked as a janitor to supplement his work-scholarship and that afforded him an opportunity to clean the laboratory where the great George Washington Carver worked. “This deeply affected me,” he said.

In 1957, he met Dr. Martin Luther King Jr. and began his long association with the Civil Rights Movement. Two years later, he decided to leave Tuskegee and attend Southern University in Louisiana. There he became even more involved in the movement as a participant in various demonstrations and rallies.

From an earlier visit to New York City he had heard of Cooper Union, and by 1960 he was enrolled at the school. During his four years at Cooper Union, he lived on the Lower East Side. At that time, the beat movement was coming to an end, but there were still a number of writers, musicians, artists and activists such as LeRoi Jones, Archie Shepp, Marion Brown and Bob Kaufman in the area to stimulate his creativity.

By the early ’60s, he also had contact with Jacob Lawrence, Romare Bearden and Norman Lewis. All of them would have a great influence on him and encourage him to pursue his artistic vision. By 1962, along with his painting, he began to venture into carving. Three years later, thanks to Jeff Waite, he began cabinetmaking and other carpentry.

During the vibrant political and artistic developments in the late ’60s—and by now he was married to Mary Staikos—his companions were artists Al Loving and Melvin Edwards, among others. In 1969, he and his wife made their first trip to Greece after he experienced a powerful dream about a tree there. When they eventually arrived in Agia Galini, Crete, he saw the tree of his dream. Meanwhile, in 1974, he had a solo exhibition at the Whitney Museum of American Art.

Before setting up shop in Crete, the couple lived in Manhattan, and by 1984, they had acquired property in Crete where Whitten would, for the rest of his life, create the largest collection of sculptures.