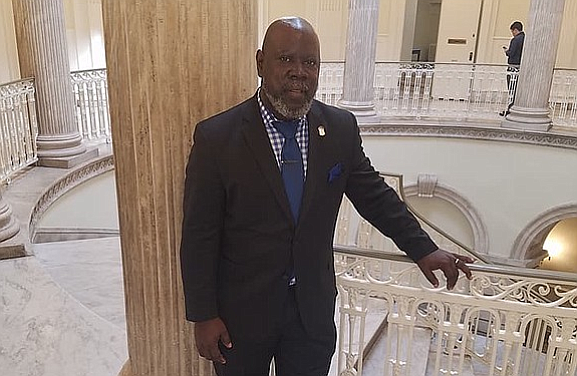 “Culture for service and service for humanity” is Phi Beta Sigma Fraternity’s motto and it’s also the motto that Kevin I. Bracey embraces.

Bracey is the president of the Epsilon Sigma chapter of Phi Beta Sigma in Harlem, where he leads members in various community programs for the organization.

Since Bracey was young he was involved in community service. His father was the president of the Stanford Avenue Block Association of his neighborhood.

“When most kids were out doing homework and partying. I was manning the command stations for the community patrol,” said Bracey, who would later take that same spirit to his adulthood.

Bracey attended Winston-Salem State University, where he become interested in Phi Beta Sigma and joined the fraternity’s Epsilon Sigma Chapter in Harlem in 2007. Founded in 1914, Phi Beta Sigma is one of the largest historically Black fraternities, with an international membership of nearly 290,000.

“Our motto is culture for service and service for humanity,” Bracey said. “That’s what we live by. I’ve always been a service-oriented person and I like to give back.”

Understanding the importance of giving back is a concept he would like to share with young people.

“Mentoring these young men and getting the right things in their minds as far as careers, colleges and entrepreneurship is huge,” said Bracey. “We have been doing a lot for the community with the group of young men. A lot of our young men don’t know how to go about community service or how to give back. We teach these young men early how to do that.”

Every Thanksgiving the Sigma Beta Club and Phi Beta Sigma feed the homeless at Paradise Baptist Church in Washington Heights.

Time is precious for Bracey, who has a nine-to-five job working at the Memorial Sloan Kettering Cancer Center. He also is a partner for PLUSH Vodka, the only African-American owned vodka company.

“People ask me how you have time to do all these things? Anytime I can [take] time to help someone I do it. And for the person who wants to learn how to do that, they have to carve out some time and just do it,” said Bracey.

There are two main aspects that Bracey wants to focus on for the current time in the community: getting people out to vote and support local politicians, and being more active in the community.

Bracey wants people to know that they don’t have to serve alone.