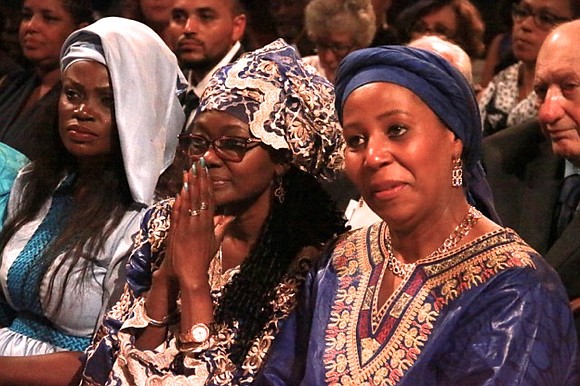 Randy Weston, the Brooklyn native and son of Africa, who made the history of the motherland a prerequisite to his live performances and many albums such as “Uhuru Afrika” (1960), died peacefully Sept. 1, at his brownstone in Brooklyn. He was 92.

His wife of 17 years, Fatoumata Weston, confirmed his death.

Weston also played at the Kamigamo Shrine in Japan in 2005. During one of my visits to Japan with the singer/songwriter Okaru Lovelace, she took me to the shrine and introduced me to the soryo (minister). He informed me the space was so crowded he had to allow people to sit upstairs (which really wasn’t a sitting space). He praised Weston’s memorable performance, how he played with the local musicians using their traditional instruments and the great respect Japan had for him.

“In the late 1970s I had the first opportunity to perform with Randy at a fundraiser for SWAPO to raise funds for support against apartheid in South Africa (this showed his commitment to the struggle for civil and human rights worldwide),” said his longtime band member T.K. Blue. “It was the first time I played ‘Hi Fly,’ one of his compositions that is an international jazz standard.”

Weston’s group of more than 40 years was named African Rhythms for a reason. It was the music of the ancestors that predated slavery.

Weston’s music, from “Uhuru Afrika” (Roulette, 1960) to “Sound—Solo Piano” (African Rhythms, 2018), the last album before his death, was a swinging totality of African beats kissing blues spirits dancing with the history of our ancestors as their voices reflected on ancient civilizations while the maestro’s bold piano melodies called upon musicians with traditional instruments to be a part of this musical equation that some call jazz.

Such was the music that played for two consecutive days during the Wake and Homegoing Service for Randy Weston. Rain fell profusely throughout the celebration. However, that didn’t seem to stop the griot’s many fans, students and friends from around the world.

So many people attended his “wake” at the Frank Bell Funeral Home in Brooklyn it was difficult to step inside the door. The aisles were filled with chairs, and a few people sat on the floor.

Rain was pouring, but inside an oasis appeared where a celestial being illuminated the entire space. It was warm and bright, and love and harmony was in the air, along with big smiles, tears, sadness and mighty joy. That was the emotional mosaic of colors filtering into the room, as Randy Weston lay in his coffin dressed like an African king, a musical warrior in his fine blue robe and fila.

He discussed ancestors, such as the Black queen Candace, Empress of Ethiopia (332 B.C.), one of the greatest generals of the ancient world, and Duke Ellington, Max Roach, Jimmy Rushing, Melba Liston, Thelonious Monk and Candido. His tenor voice flowed like the waters of the Euphrates River.

When I left his universal brownstone, I felt invigorated. I held my head a little higher and straightened my gait, and like my mentor, I was showing off a big smile. This anointed griot had equipped me with a spiritual knowledge of African culture and moved me with his music.