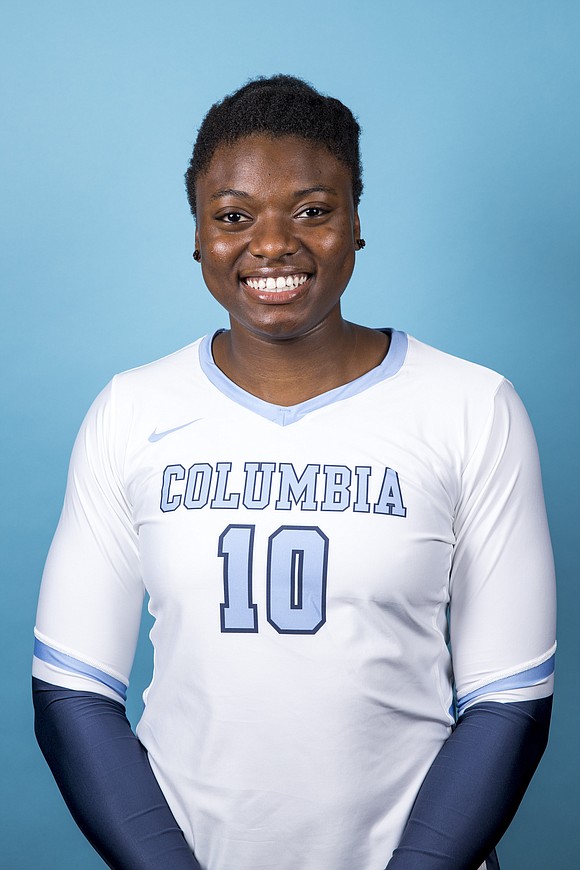 As Columbia University women’s volleyball heads into Ivy League conference play, the players are feeling strong and well prepared. Last weekend, the Lions played four matches in two days—winning three of the four in convincing fashion. Friday, the team dispatched St. Francis College and Fordham University in the Big Apple Battle held at Columbia. Saturday, the team traveled to Hofstra University on Long Island, defeating Hofstra in a fierce five-game battle before succumbing to Seton Hall University in the final match of the Hofstra Invitational.

Throughout the four matches, Columbia’s standout player was junior middle blocker Chichi Ikwuazom, who grew up in Inwood. The pre-med student always puts team first and credits a strong team effort for the victories. Although Ikwuazom had the chance to leave NYC to play college volleyball, she said a trip to campus helped her decide to stay close to home.

“I first visited and I got to hang out with the team, and it felt like family immediately,” said Ikwuazom. “It’s all about a feeling. I felt this pull toward Columbia and Columbia volleyball. They’re about team first and being there for each other.”

Ikwuazom first discovered volleyball in middle school. Encouraged to join the team, she gave it a go. With her talent evident, she began playing club volleyball as well. She also played on her high school team at Horace Mann in the Bronx.

“I really love the sport—the competitive nature of the sport, but it also heavily relies on team, the people around you, because without your teammates you cannot really achieve anything,” she said.

The transition from high school to college took some adjustment, especially in terms of time demands, but Ikwuazom said being a student-athlete helps her stay focused and balanced.

The volleyball team has a new coach this season, Allison Keeley. Ikwuazom said Keeley brings positive energy to the team as they pursue first place in the Ivy League. Keeley returned the compliment.

“The caliber of the young women I’m working with is unbelievable,” said Keeley. “I give the players a lot of credit. They’re extremely open; they’re willing to learn. They’re very receptive and very supportive, so it’s been fantastic.”

Keeley added, “Chichi is extremely humble, willing to learn and supports her teammates well. She’s an elite athlete in the country.”