Manning becomes the scapegoat for the Giants’ early season deficiencies 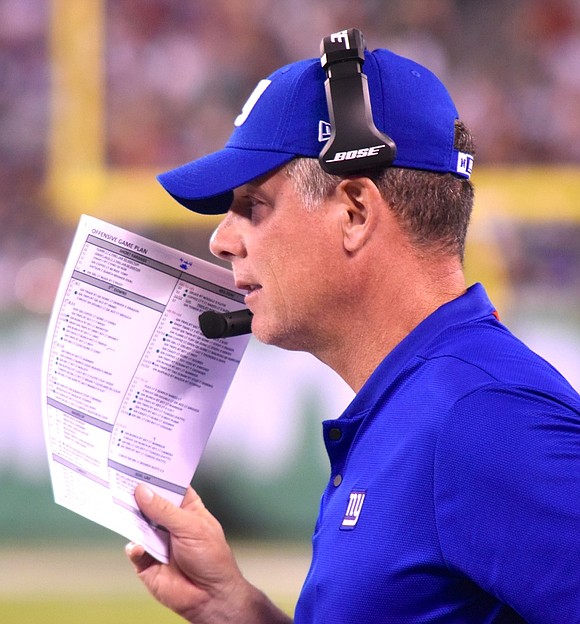 Giants head coach Pat Shurmur was justified in emphatically defending Eli Manning after the offense’s horrendous performance in losing to the Dallas Cowboys 20-13 Sunday night on the road. The unit’s minimal output against the Cowboys came one week after they could only generate 15 points versus the Jacksonville Jaguars in the Giants’ season opening loss at MetLife Stadium.

In both defeats, Manning has become a convenient scapegoat for many Giants fans and members of the media who argue the franchise should have drafted a replacement for the 37-year-old quarterback with the No. 2 overall pick in April’s NFL draft, specifically Jets rookie signal caller Sam Darnold, instead of selecting running back Saquon Barkley.

With the offensive line continuing a trend of unstable play that has plagued the Giants for four seasons, counting the beginning of this campaign, Manning’s ability to effectively guide the offense has been severely hampered. He was sacked six times for a total of 59 yards lost.

“Absolutely, Eli’s confident,” said Shurmur to the assembled reporters when asked if Manning’s faith in the line has wavered. “He’s a pro and he battled throughout the game and I thought he did a good job. I do sense confidence, yes.”

Shurmur reiterated Manning’s mindset as he was queried on whether the constant pressure he has faced from opposing defenses has already led to the 15-year veteran becoming wary.

“I sense confidence in Eli. He’s a pro,” Shurmur bitingly responded.” Although it’s only been two games, Shurmur’s apparent frustration is warranted. Both the Jaguars and Cowboys frequently had Manning rushing throws and desperately moving in the pocket as they consistently imposed their will on the Giants’ front five.

Even when Shurmur employed formations of two tight ends and a running back to help block rushers —known as max protection—to provide Manning adequate time to allow passing plays to develop, the QB still found himself under siege.

The misconception and false narrative that a younger, more mobile quarterback is the answer to the Giants’ woes is disproved by the struggles facing the Seattle Seahawks’ 29-year-old Russell Wilson and the Houston Texans’ 23-year-old DeShaun Watson. Wilson, one of the most mobile quarterbacks in NFL history, has been sacked an astonishing and dangerous 12 times in the 0-2 Seahawks’ two games this season and Watson, another elusive quarterback, has been sacked seven times in the Texans’ two losses.

The 0-2 Giants, the only team in the NFC East without a win this season, will face Watson and the 0-2 Texans this Sunday in Houston (1 p.m.). The Giants’ offensive line has also been ineffective in opening holes for Barkley. The rookie’s strength, speed and quickness has been evident. Yet, the Giants’ rushing attack, one of the worst in football in the four previous seasons, has been essentially stymied by a lack of cohesion and production by the line.