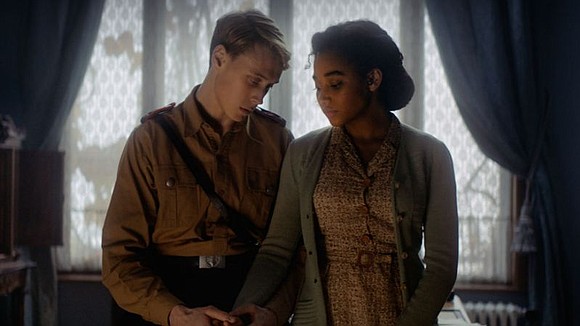 With “Where Hands Touch,” British-Ghanaian director Amma Asante revisits her roots by making a film with young adults at its center. Asante’s first film, the critically praised “A Way of Life,” has a teen girl as its main character. So does “Where Hands Touch,” with main character Leyna played by biracial actress Amandla Stenberg. Of course “Where Hands Touch” has resulted in a firestorm of controversy, given that Leyna falls for Lutz, a member of the Hitler Youth. Consisting of boys aged 14 to 18, the Hitler Youth is the training program for young men who eventually become Nazi soldiers.

Lutz becomes instantly smitten with Leyna after seeing her on the street one day. To be certain, the romantic Nazi storyline is terribly troubling, and there is no way to be comfortable with it. The film has no perfect answers, no neat tying up with a bow. It offers up a part of history when Blacks, especially Black women, are always erased. “Where Hands Touch” also asks tough questions of those in positions of privilege, questions that are completely relevant to the facts on the ground today.

Also starring Abbie Cornish as Leyna’s mother, Tom Sweet as her white younger half-brother Koen and George MacKay as her love interest Lutz, “Where Hands Touch” is, from a technical standpoint, an excellent film. It is masterfully shot, well-acted and beautifully written. Scenes between Leyna and her mother pack a powerful punch, and the viewer can’t help but empathize with their frustration and anger. Sweet, as Leyna’s younger brother, conveys all of the confusion of a young boy who loves his sister and at the same time believes authorities who tell him that she is sub-human because she is part African.

The family dynamics are so impactful they could have sustained their own story. However, reproductive autonomy is central to the history of the so-called Rhineland Bastards, the Nazi’s insulting term for Germans who were part Black. They were thought to have been the progeny of Black soldiers who occupied the post-WWI Rhineland. Hitler’s primary focus with regard to this group of Germans was to prevent procreation and began his sterilization of mixed-race Germans in 1933. The action in “Where Hands Touch begins” in 1944, so the sterilization program was in full motion. To illustrate this fact, according to Asante, a romantic arc was necessary.

That begs the question of why Lutz had to be a Nazi. Here too, there is no simple answer. Lutz, being under 18, was a member of the Hitler Youth. According to William Shirer’s book, “The Rise and Fall of the Third Reich,” in 1934 a law declared the Hitler Youth to be the only legally permitted youth organization in Germany, and stated that “all of the German youth in the Reich is organized within the Hitler Youth.” Per Peter Stachura in “Nazi Youth in the Weimar Republic,” by 1936 it had been codified into law that all Aryan youth be part of the organization. Koen, Leyna’s younger brother, was also in the Hitler Youth (the version for boys younger than 14) and wore the same tan and black uniform with Nazi emblem on the armband as Lutz.

To be sure, some of the members of the Hitler Youth historically were actively against Nazi ideology. The most famous perhaps being Hans Scholl, who attempted to start a movement against the Nazis. In Asante’s film, Lutz isn’t written as an anti-Nazi activist. He is pro-Nazi. So is Leyna to the extent that they were pro-German. In their adolescent minds, Nazis represent German pride. The question becomes, as the film goes on: What do they do when confronted with the truth? In this way, “Where Hands Touch” isn’t just a story about young adults, but is also a coming of age story for both Leyna and Lutz.

Asante has said in previous interviews that she would like for this film to be one that young people can see and discuss with their peers as well as adults. Asante doesn’t write Leyna or Lutz as heroes as main characters usually are. Neither are they “anti-heroes.” They are average teens living in extraordinary circumstances, both of them at moral and personal crossroads.

Leyna, who harbors feelings of anti-Semitism, comes to a point where she is confronted with the fact that Jews are full human beings just as she is. Lutz, in a position exponentially more powerful than Leyna’s, comes to a point where he must choose whether to follow the path that will reinforce his own power as an “Aryan” or choose the path that leads to acknowledging the humanity of all other human beings, even if it means defying everything he has ever believed and everything he has ever been told by his nation, his community and even his family. It is a question that millions of young white adolescents the world over are being confronted with multiple times each day. Asante, with “Where Hands Touch,” tries to tackle this question. No one wants a film that would encourage sympathy for Nazis, and with his uniform and jingoistic pro-Germany utterances, Lutz appears to be part hateful, homicidal behemoth. In actuality though, Lutz is not there—not yet anyway. He isn’t Amon Goeth. He is though, where many white kids are right now, asking “Which path will I take?”