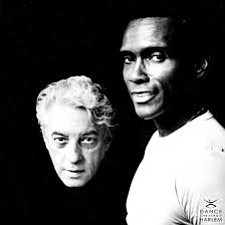 Arthur Mitchell, the internationally recognized dancer, artistic director, choreographer, educator and visionary, who made history in 1956 as the first Black member of the New York City Ballet and in 1969 as founder of the groundbreaking Dance Theatre of Harlem, died Wednesday, Sept. 19, after a long illness. He was 84 years old.

The standard obituary would offer a litany of accomplishments by this son of Harlem, who was born March 27, 1934, one of five children of Willie Mae Hearns Mitchell and her husband, a building superintendent, Arthur Adam Mitchell. It would identify such milestones as his admission to the High School of Performing Arts, his work with a few modern companies and the Broadway show “House of Flowers,” alongside Alvin Ailey and Carmen de Lavallade. It would highlight NYCB’s Lincoln Kirstein’s offer of a full scholarship to the School of American Ballet. And, of course, it would highlight the turning point—a 1955 invite from Kirsten and George Balanchine to join NYCB and the promotion, a year later, to principal. The standard obit would also note highlights of his historic 15-year career, including the debut in Balanchine’s “Western Symphony” and signature performances in “Agon,” “A Midsummer Night’s Dream” and “Slaughter on Tenth Avenue.” And, of course, it would cite the numerous awards, including a Dance Magazine Award (1975), a Kennedy Center Honor (1993) and more. But, as a former DTH dancer said, if you must measure this man’s life, measure it in terms of lives touched.

Mitchell’s career unfolded against the turbulent backdrop of America’s civil rights era. He once recalled that some NYCB parents didn’t want a Black man partnering their daughters. Balanchine told them they could always leave. Even, during his debut, a stunned member of the audience exclaimed loudly, “Oh, my God! They have a nigger in the company!” The man was silenced. Mitchell didn’t skip a beat. The show went on. As late as 1965, some television stations refused to broadcast Mitchell partnering white Diana Adams in the “Agon” pas de deux when, in fact, the contrast of their skin tones was intentional.

Mitchell was disgusted that “a prejudiced minority has dictatorial power over what all Americans are allowed to see.” Yet, he persisted and his career soared. Critics praised and audiences applauded what one New York Times critic described as his “dazzling presence, superlative artistry and powerful sense of self.” But, as Mitchell once explained, inherent in his performances was a sense of mission. “Whenever I danced, I danced for my mom, my family and my people,” he said.

In 1969, a year after Dr. Martin Luther King Jr. was assassinated, Mitchell’s sense of mission prompted him to found Dance Theatre of Harlem, the school and Black ballet company, with the help of teacher/mentor Karel Shook. Inspired by Mitchell’s faith in the transformative power of art, DTH was a product of the social, political and cultural forces of the civil rights era, and as a change-agent it continues to have a profound impact.

Even before its official 1971 debut at the Guggenheim Museum, DTH dazzled audiences at open houses, lecture-demos and such. Choosing works that complimented the company’s evolving technical facility, Mitchell made sure that as the dancers’ artistry developed, the repertory showcased their talent. With ballets by Balanchine, Jerome Robbins, John Taras, Geoffrey Holder, Louis Johnson, Alvin Ailey, Talley Beatty, Lester Horton and himself, among others, Mitchell said he was choosing works that “have a standard of performance that DTH has to equal and surpass.”

The company wowed audiences from the Caribbean to Latin American, Western and Eastern Europe, Russia and Africa with an eclectic selection of neo-classical ballets, modern and Afrocentric works and a breathtakingly beautiful “Firebird” and “Giselle.” Critics declared DTH “a miracle.” The dancers became stars. Performances attracted new audiences. Some doors, once closed, opened. Although Mitchell’s impact is yet to be fully acknowledged, it was truly profound.

His loss is deeply felt by generations of DTH dancers, such as Virginia Johnson, Lydia Abarca, Gayle McKinney, Lorraine Graves, Keith Sanders, Robert Garland and others. His success even encouraged contemporaries such as former Ballet Russe de Monte Carlo’s Raven Wilkinson, who joined that company shortly after Mitchell was accepted into NYCB. And, Philadanco’s Joan Myers Brown said DTH also offered her students valuable career opportunities. The doors Mitchell helped open led onstage, backstage or to managerial positions. Just ask Vernon Ross, wardrobe assistant for ABT’s male principals, or Ron Alexander, dance director at Bed-Stuy Restoration, or Marcia Sells, Dean of Students at Harvard Law School, or Alicia Graf, newly appointed Director of the Dance Division at Juilliard. As close friend Carol Wiggins said, “Mr. Mitchell was a young man raised in Harlem who, despite success downtown, came back to Harlem and to help his community, and the community loved and respected him for it.”

“I’m so grateful for what he’s done for DTH and for me” said former prima ballerina and current Artistic Director Virginia Johnson, fighting back tears. “You know, they told me I couldn’t be a ballerina, but he made me into one. I danced ‘Giselle.’ I’m 5-foot-8, and I danced ‘Giselle.’ In those days, big people like me didn’t do roles like that. I don’t care what color your skin is. My life would not be anything near what it is now without Arthur Mitchell.”

One after another, members of the DTH family testified to the impact Mitchell had on their lives. “He took a 17-year-old half-Black, half-Puerto Rican girl from the Grant Houses in Harlem and turned me into a ballerina,” said a sobbing Lydia Abarca, the first Black ballerina featured on Dance Magazine’s cover and in a photo spread by Queen Elizabeth’s brother-in-law, Lord Snowdon. “I had trained at Juilliard and Harkness, but it wasn’t until I met Mr. Mitchell that I was really introduced to ballet. He took me places and taught me things I never, ever would have been able to do otherwise.”

“He was more than an artistic director of Dance Theatre of Harlem,” said Theara Ward, only 12 when she came to DTH. “Mr. Mitchell was our dad, and like a dad he had strict rules for how we dressed and behaved. I’ll never forget before our trip to Russia we had to learn all kinds of protocol. He was relentless in his pursuit of excellence, and his coaching is etched in my body, my DNA, my spirit.”

“He made our lives extraordinary” said former ballerina Lorraine Graves, who, in recent years, Mitchell relied on to mount DTH ballets on other companies. “I would never have gone to South Africa and met Nelson Mandela, shaken hands with Princess Diana or met Michael Jackson had it not been for Mr. Mitchell. I’m not only grateful, I’m humbled by this.”

“Mr. Mitchell was a connector” said Robert Garland, a former dancer and now director of DTH’s school. “Recently, I saw a picture of him in a Smithsonian magazine article with Agnes de Mille. He connected us to her, Alvin Ailey and many great people. And, he connected his culture to a larger world and helped that world see what the African-American aesthetic could bring to their existing forms in different ways.”

American Ballet Theatre’s Misty Copeland, who felt the impact of Mitchell’s generous spirit, said recently, “I must have been 22-years-old when he invited me to come take company class at DTH. Afterward, we sat in his office and talked for about an hour. I think that was the first time I talked about what it was like to be a Black ballet dancer. It was as if he saw into my soul. He told her to protect my spirit. ‘Don’t ever let them take that away from you. Carry that with you whatever room you walk into.’ I put that in my journal. It meant so much to me to hear that, but I can’t imagine how he felt carrying the responsibility he carried on the path he walked so long ago. I just want to help carry out the dream he had for the future of ballet.”

Former DTH dancer and ballet master Keith Saunders, who is now an assistant professor at Texas Christian University, says he finds solace in the fact that Mitchell lived to see his company survive for 50 years.

“Fifty years represents several generations of dancers who danced because of him,” said Saunders. “His influence has already manifested itself. It has spread around the world. Yes, this is a loss of great magnitude, but the seeds Mr. Mitchell planted have ridden the winds across the oceans and sprouted around the world. We will grieve. We will mourn. But we will also redouble our efforts because now it’s up to us. Mr. Mitchell’s influence is so profound that it can’t be measured, but if you must measure it, measure it in lives touched. The human impact of this man’s life is immeasurable.”