‘Nappily Ever After’ comes to Netflix 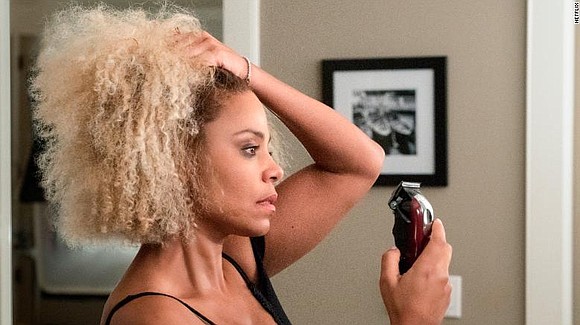 “Nappily Ever After,” the new romantic comedy produced by Tracey Bing and based on the novel of the same name by Trisha R. Thomas is now playing on Netflix. Directed by Haifaa al-Mansour, Saudia Arabia’s first female film director and starring Sanaa Lathan in the lead playing Violet Jones, the tone of the film is light despite the continued controversy that swirls around African-American woman and their hair.

When we first meet Violet, a workaholic marketing exec driven by looking and being perfect, she’s slipping out of bed to apply her makeup and have her equally workaholic mother (Lynn Whitfield) arrive in the wee hours of the early morning to flat-iron her hair—all before her handsome boyfriend, Clint (Ricky Whittle), wakes up. Waking up, she’s perfect, but the effort is taking its toll. She’s expecting a proposal of marriage for her longtime beau but instead she gets a tiny, nervous puppy.

In an instant Violet unravels. She leaves Clint, shaves her head after several hilarious but utterly botched makeover hairstyle attempts, rethinks her career, sparks a flirtation with hairdresser Will (Lyriq Bent) and decides to mentor his precocious daughter Zoe (Daria Johns).

“Nappily Ever After” has many of the necessary ingredients for a great romantic comedy, including having Lathan in the lead. There is also solid physical comedy around the hair issue, which gives a better sense of her emotional life, so that works well.

Bald-headed, aka naked, sans her “crown,” she now must ask, who is ‘Violet’ and what does she want for herself? And as women of color living in a world dominated by white males, who reject our natural attributes, we ask ourselves what truly makes us beautiful?

But this film is a comedy and the subject does not get explored.

In the comedy, what follows is Viola asking and answering that question for herself. In the pivotal breakup scene, Clint’s major critique of their two-year relationship was that it was like being on one long first date.

Translation: Who are you, lady?

“Nappily Ever After” is really a love story about hair. Let’s keep it 100 percent and state the obvious. Hair is identity for Black women, so when Violet dramatically changes her hair, her personality changes as well. Example, a swinging chestnut wig has a platinum bob, making her look and be perceived as a purring sex kitten. Spoiler alert—she’s not. A quick burnout on the dating scene is enough, and she runs back to Clint, drunk, and discovers that he’s moved on and that pushes her right over the edge. She shaves her head in the film’s standout scene. Of course, in the screenplay, this bold act is meant to be cathartic, but in truth it lacks impact.

But there are some charming moments after she’s prancing around her old world bald. An overall theme emerges about giving yourself permission to be “you,” and although that might sound so very simple, think about the amount of money women (maybe even you) spend in the hair and beauty markets. It’s trillions of dollars, and that’s saying a lot about what women want or don’t want, about what women feel that they need or don’t need, and about the big question, the proverbial elephant in the room for women of color: Who are you really doing this all for? It’s not a quick answer and like the sands of time, it shifts around, never really anchoring long or well to anything of substance.

“Nappily Ever After” belongs on Netflix. It’s light and charming, an evergreen love story produced by an intelligent and thoughtful producer, Tracey Bing.