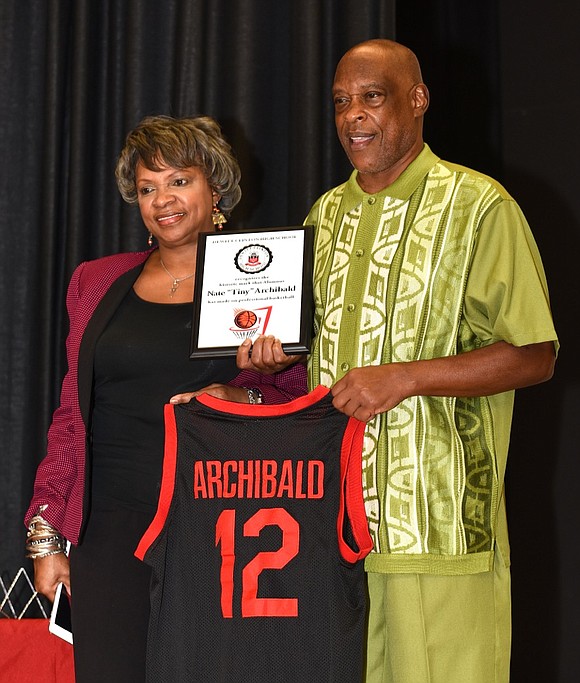 In conversations about great New York City basketball players, the name Nate “Tiny” Archibald must automatically be mentioned. Archibald is not only one of the best players to come out of New York, he was voted one of the NBA’s 50 all-time greatest honoring the 50th anniversary of the founding of the National Basketball Association in 1996 and enshrined in the Naismith Memorial Basketball Hall of Fame.

His pro resume states that Archibald is an NBA champion, an NBA All-Star Game Most Valuable Player voted to six NBA All-Star Games and three All-NBA First Teams during his 14-year career. Archibald was an NBA scoring champion and the assists leader both in the same season. An extraordinary feat.

Archibald, who turned 70 earlier this month, built his legend at a young age on the basketball courts of this city. He, along with the late Dolph Schayes, another NBA great, were honored Monday by their high school, DeWitt Clinton in the upper Bronx. Clinton’s gym was named after two of their most outstanding athletes that excelled to the highest level.

Schayes, a power forward/center, also has NBA champion on his list of credits. He was also a 12 times NBA All-Star, voted six times to the All-NBA First Team and, like Archibald, the Naismith Hall of Fame. He was represented Monday by his son, Dolph Schayes Jr.

NBA legends Earl “the Pearl” Monroe and Thomas “Satch” Sanders were onstage as hosts, and many of the city’s most notables from the basketball community were in the audience to celebrate Archibald and Schayes.

“It was a great event,” said Ernie ‘Nes’ Morris, a longtime friend of Archibald’s. “It was great for

Tiny to see all the guys like Ron Behagen, Jerry Harkness, Freddie Crawford, Pee Wee [Kirkland], Tom Konchalski, Emmit Bryant and Jerry Harkness there. And having Floyd Lane up on that stage was heartwarming.”

Lane, a legend in his own right, was instrumental in helping Archibald turn his life around while in high school and adjust his priorities, helping him become more focused on education after he’d been cut from the team during his sophomore year. He was able to rejoin the team in his junior year after improving his academic standing. He was appointed team captain and became an All-City high school player.