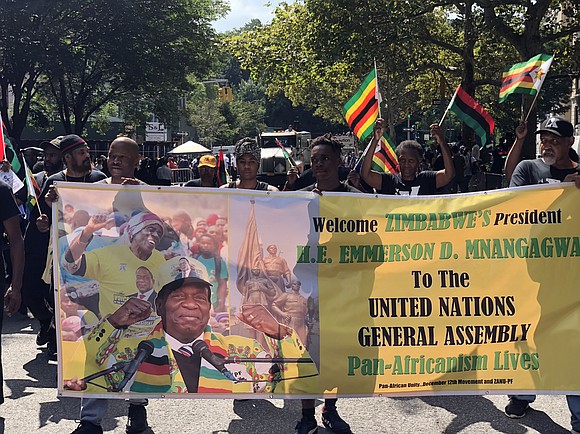 “Zimbabwe has led the continent of Africa on the issue of land reclamation and redistribution to the indigenous people who fought and sacrificed their lives for their independence,” declared human rights attorney Roger Wareham. “Land is the basis of independence and economic sovereignty. The Zimbabwe African National Union-Patriotic Front and the people of Zimbabwe set the example of self-determination and leadership for African people worldwide.”

Supporters marched through the streets of Harlem under a large banner that read, “Welcome Zimbabwe’s New President H.E. Emmerson D. Mnangagwa to the United Nations General Assembly,” each waving both the red, black and green African Liberation flag and the Zimbabwe flag or placards stating, “Pan-Africanism Lives!” and “End the Sanctions!” The marchers moved out from 125th Street up Adam Clayton Powell Jr. Boulevard to 135th Street and back down Malcolm X Boulevard returning to rally in front of the Harlem State Office Building.

Viola Plummer, chairperson of December 12th Movement stated, “We are here today in solidarity with the people of Zimbabwe and President Emmerson D. Mnangagwa. We have a long history with ZANU-PF and will continue to fight to end the illegal sanctions imposed on them by the United States and other Western imperialist nations. Zimbabwe is moving toward developing their economy on their own terms, and we will do what we can to support those efforts. Their uncompromising position on land reform is a lesson for us all from Harlem to Harare! Pan-Africanism lives!”

“President Mnangagwa has declared himself a ‘servant of the people of Zimbabwe.’” said spokesman Omowale Clay. “As world leaders embrace the new administration’s economic development goals and their declaration that ‘Zimbabwe is open for business,’ the United States maintains their increasingly isolated regime-change mentality. We must demand an end to the sanctions now.”

Many marchers, including State Assemblyman Charles Barron and City Councilwoman Inez Barron, were given the opportunity to speak their minds. Organizations attending included the Friends of Zimbabwe, the Elombe Brath Foundation, the All-African People’s Revolutionary Party, the Nation of Islam, the D12 Committee Against Ethnic Cleansing of the Black Community, the Patrice Lumumba Coalition, the Communist Workers League, the People’s Organization for Progress, Workers World Party and more.

Mnangagwa was scheduled to address the United Nations General Assembly Wednesday, Sept. 26, and a support rally was scheduled to be held at Dag Hammarskjold Plaza on First Avenue and 47th Street at 3 p.m. For more information, contact the December 12th Movement at 718-398-1766.