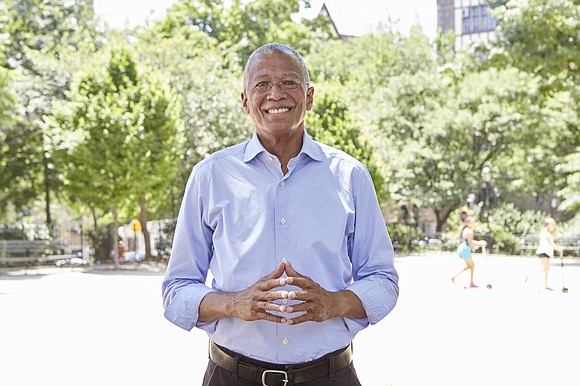 “The head of the snake has been cut off…meaning Jeff Klein,” said Robert Jackson. “But we need to flip several more seats in order to have a direct impact.”

“I was never out,” Jackson said when asked about getting back in politics. “It was a continuous type of involvement in your community. For me, going back from a historical perspective: Parents Association…Democratic Club…Community School Board. My involvement is continuous. It’s not like I’m going anywhere.”

Jackson served on the New York City Council from 2002 to 2013, served as president of Community School Board 6 and worked for a union. Politics has always been a part of his life. The election of President Donald Trump has led to a wave of progressives entering politics around the country who want to combat Trump’s agenda. Jackson’s move to take the State Senate District 31 seat at this time isn’t an accident. He’s called Washington Heights home for 43 years. While sitting in his campaign office in the heart of the neighborhood, Jackson emphasized his stake in the game for making his home a better place for all.

I have an investment in this community,” said Jackson. “And as someone WHO is continuously involved in Democratic politics, this was a no-brainer for me to run for the state senate this time because of the fact that three of us shared 95 percent of the vote two years ago.”

Two years ago, Jackson ran for the same Senate seat against current State Sen. Marisol Alcantara and Micah Lasher, chief of staff to former New York State Attorney General Eric Schneiderman, and lost. This month, the former City Council member ousted Alcantara in the primaries. After her election, Alcantara aligned herself with the infamous Independent Democratic Conference, stifling the agenda of progressives as a result.

“And knowing that Marisol went and basically joined the IDC…,” said Jackson. “…To affiliate themselves with the Republicans and empower the Republicans to be in control, which has so many negative impacts on the communities we represent: affordable housing, the DREAM Act, the Liberty Act, health care, the environment, farmworkers. All of these things. They simply have not moved forward because of the Republicans.”

Jackson uttered phrases many have used to describe IDC-affiliated Dems. “Turncoat Democrats. Rouge Democrats. These are all descriptive words of the IDC,” he said.

When it comes to the IDC, activists have pointed much of their ire at New York State Gov. Andrew Cuomo for letting it happen. After the majority of IDC members lost their primaries this month, Cuomo had a news conference the next day claiming that the progressive wave was just a ripple and a “fluke.” Cuomo spent $16 million fending off Cynthia Nixon in the gubernatorial primary (who spent 25 times less than he did).

“When people analyze his history as a governor in dealing with the IDC…we can go back and talk about this, that and the other, but I’m glad he’s moving forward,” said Jackson. But he did have a response to Cuomo stating that the same number of Democrats will end up in the State Senate and it’s just a rearranging of the chairs on the deck. Jackson repeated a statement he made on NY1 the day after the primary.