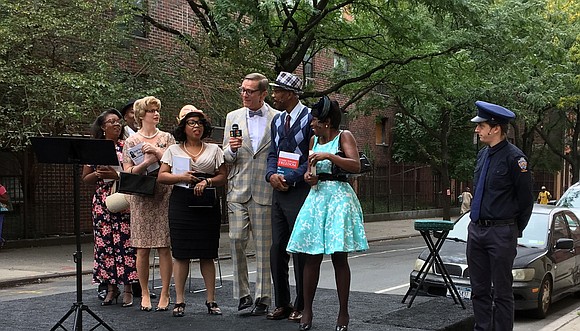 Actors lined up for Dr. King’s book signing at former Blumstein’s department store on 125th Street, in a re-enactment of the Sept. 20, 1958, failed assassination attempt.

In his invocation, Touro College Executive Vice President Rabbi Moshe Krupka recalled Dr. King’s dedication to peace and solidarity. “In an ever-increasing age of polarization, let us remember Dr. King’s call for unity,” said Rabbi Krupka. “King said, ‘Whatever affects one directly, affects all indirectly. I can never be what I ought to be until you are what you ought to be. This is the interrelated structure of reality.’ He taught us the importance of joining together as a community—where each member feels for the others success and welfare as if it were his or her own.”

Touro College President Dr. Alan Kadish spoke further about Dr. King’s impact on the world. “It’s a tremendous honor and privilege to be here today helping to celebrate the legacy of the only American to have a national holiday named after him,” said Kadish. “It is a tribute to what he accomplished for our country and this community. We are very proud at Touro to be part of the Harlem community and to be commemorating the life of a truly great hero. What happened 60 years ago once again emphasizes how important it is for every member of our society to have access to high-quality health care. We have to continue to support Harlem Hospital and Metropolitan Hospital so that when the next Dr. King is around, he or she can be saved.”

Dr. Hazel Dukes, president of NAACP New York State Conference and a founding member of TouroCOM’s advisory board, spoke of Dr. King and her own relationship with TouroCOM. “Think about what this building meant to Harlem and what it means to us now,” she said. “The reality that TouroCOM imparts is that there is still hope; that there is still a place for you. That we’re still calling out that there is a better way of life.”

“It wasn’t until the 1930s that they would allow Black doctors to work in Harlem hospitals,” said Sharpton. “Adam Clayton Powell’s first crusade at the Coordinating Committee for Employment and as pastor at Abyssinian Baptist Church, was a coalition that led to five Black doctors in the ’30s being the first Black doctors to do their work and perform their skills in Harlem Hospital. Had it not been for that movement and Adam Clayton Powell, there would not have been an integrated group of surgeons to save Dr. King some dozen years later.”

Sharpton concluded his speech by thanking Touro. “We should support the Touros that open new horizons for us because they may be the ones that spare us what Dr. King suffered that day,” he said.